Helderbourgh Stadt (Dutch: Helderburg), also known as Helderbourgh City, is the capital of the Grand Duchy of Helderbourgh and the canton of the same name.

The city is located atop a plateau sitting at the edge of an escarpment running along the western flank of Helderberg Mountain. 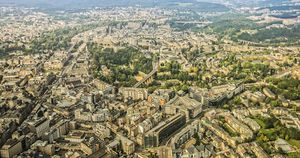 Helderbourgh Stadt from the air

Due to its reasonably sheltered location, the city became a refuge during the civil war within the United Principalities of Treisenberg. This made the city the largest city in the country. When the civil war ended, Helderbourgh became the capital and name giver of the new state. To distinguish the name of the new state, as well as the canton of the same name, "Stadt" was added to the name: Helderbourgh Stadt.

Since the appointment of Arkadius Frederik Gustavus des Vinandy as Grand Duke in 1672 AN, the city has undergone major development. The previously provisional homes are increasingly being replaced by old-style residential blocks. The city expands and the suburbs are built like a landscape garden. 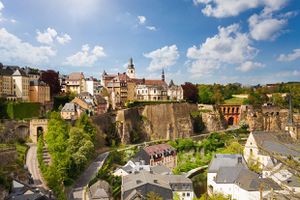 The upper and lower city

Helderbourgh Stadt lies on a plateau of the western flank of Helderberg Mountain, slightly east of the centre of Helderbourgh. The mountain closest to the city is Helderhorn with a height of 858 m (2,815 ft).

Steep cliffs surround the upper city that drop into the narrow valleys of the Alzig and Attert rivers, whose confluence is in Helderbourgh Stadt. The 70 m (230 ft) deep gorges cut by the rivers are spanned by many bridges and viaducts, including the Elisabeth Asara Bridge. Although Helderbourgh Stadt is not particularly large, its layout is complex, as the city is set on several levels, straddling hills and dropping into the two gorges.

The Batavian quarter (Batavian: Bataafsch Kwartier) lies between the Elisabeth Asara Bridge and the Grand Central Station. A neighborhood where mostly Batavians live and the Bataafsch Huys (Common Language: Batavian House) is located. The Bataafsch Huys is the exchange for gold and other precious metals. 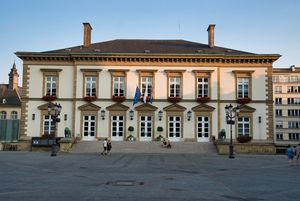 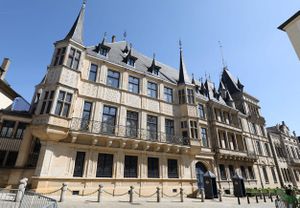 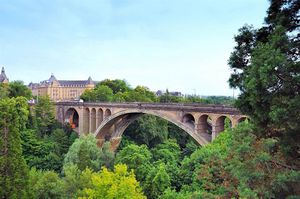 The composition of the city council is as follows:

Helderbourgh Stadt is the seat for the Helderbourgh Government. The grand duke and his family live in the Vinandy Palace, while the Grand Ducal Palace functions as a work residence.

The various ministries and the National Assembly (parliament) are based in the city.

Among the places of interest are:

Helderbourgh Stadt is situated in the heart of southwestern Cibola. It is therefore connected to several highways: 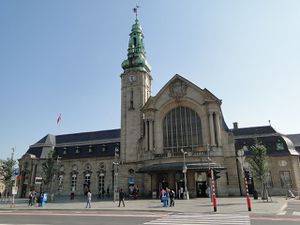 In 1675 AN the first tram line was opened between the Grand Central Station and the upper city. There are plans to provide the city with multiple tram lines, including between all park and rides and the centre.

The city is served by Helderbourgh International Airport, the country's most important international airport. The airport is connected to the city by bus services and a railway line. A tram line is currently being constructed and opening is expected in 1677 AN. The airport is the principal hub for Helderbourgh's flag carrier, Helderair.