Greater Gosling, officially the Domain of Greater Gosling, is a crownland of the Frankish Empire. It is located on the Keltian continent and belongs to what is called "Francia Occidentalis".

Originally Frankish Gosling consisted of Goose Island, on which the city of Port Goose is located. Due to population growth, surrounding islands and ancient Shirlan were claimed.

The name "Greater Gosling" is an oxymoron, because of the contrast in "greater" and "Gosling" (a small goose). The name refers to enlargement of the living space of the Portogeese and to the origin of the Portogeese, the Kingdom of Gosling. 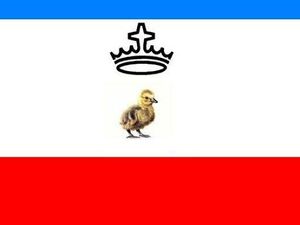 Flag of the Kingdom of Gosling

The Kingdom of Gosling was part of the Confederacy of Independent States and was located in the north of the Benacian continent. Although the kingdom only existed for a short time, its name can still be found in "Gänslein Kamm" (Gosling ridge), a ridge situated between the rivers Main and Oder. The then capital, Kingsport, is now located in the Franconian Gau Neustria and can be found on the detailed map under the Gascon name Port du Roi.

In the Greater Gosling area today, there is a rich history of successive nations. The earliest known occupier of the area was the Principality of Sidonia. From Shirian sources it is known that Sidonia was a knighthood, which was a loyal ally of the Atterans. The Sidonans did little to colonize or develop the area.

After Sidonia disappeared from the map, Shirlan came into being after an unoccupied time. This country included the northeast coast of the Keltian continent, including the Lady Esther Isles and the Batavian islands of Queen Faya Veronique Isle, Dietsberg and Princess Fränzi-Ferdinanda Isle. Until only territory remained the current Greater Gosling forms and the land was annexed by Shireroth as County of Shirlan. Shireroth archives talk about Shirlan debacle, where activity was manipulated by one person who initially had several forum accounts converse unnoticed.

After a time of emptiness, the area was part of the Federative Republic of Chine, part of Nova England, the Republic of Xinguo and Democratic Republic of Kampong. Then as Toketi New Shirlan, part of the Confederation of Gralus, the Kingdom of Toketi and the Gralan Empire. During this time the archipelago was given the name Vraillan Isles until this day. In 1615 AN the Kingdom of Toketi only included the archipelago, while the Shirlan Peninsula came under the flag of the Independent Realm of Ergonia for a short time.

In the ship "Golden Goose" pioneers from the original Gosling arrived on the island, what they have come to call Goose Island. There they founded Port Goose, which would remain the most important settlement on the island to this day. The islanders began to call themselves Portogeese.

When the Brettish arrived the island was already thoroughly settled, even though the Kingdom of Gosling had been gone for centuries, and their main economic staple was in breeding geese and other fowl, fishing, and some very limited farming, mostly of sheep. The islanders traded with other islands in the Vraillan Isles, with settlements along the Keltian coast, and otherwise kept to themselves. A deal was struck between the local governor, Floyd Thomaston, and the King of Brettania, whereby Port Goose would become a colony of the Brettish Isles, receiving protection and aid, and in return the island would serve as a refueling port for the Brettish maritime economy. The colony was called "Crown Colony of Goose Island".

In 1674 AN Goose Island came under Amokolian flag. After the king had visited the island, it became clear to him that living space on the island was very limited. In addition, the available land for agriculture and geese breeding was insufficient. Thus, in 1676 AN the habitat was extended to almost the entire Vraillan Isles and the Shirlan peninsula, to the borders of the original Shirlan under Shirian flag.

This also led to an administrative renewal, as a result of which Goose Island with its new habitat was classified as a crownland within the Frankish Empire. A new capital was founded: Colonia Arcadia.