This article is for the Jingdaoese province. For the former independent nation, see Gong Federation.

Gong is a province in Jingdao. It was the first region to support the Jingdaoese cause in 1623 AN, when the Haigui Emperor convinced the Apollonian authorities of the A.R.S.E. to join the Empire of the Great Jing. By then, it had already been part of Jingdao for five Norton years. But its strong cultural ties with the mainland, and the increased living conditions on what the Jing considered to be their "model colony", swayed many of the Kildari to support the annexation movement.

The Province is home to around 7 million residents. With over five million being recognised as Jing descendants, followed by 1.25 million Kildari, it's one of the more densely ethnic Jing regions of the Empire. The presence of a small group of Batavian settlers (around 250,000 in 1666 AN) can be traced back to Kildarian times and the high days of the Batavian Second Kingdom (1523 - 1579 AN). 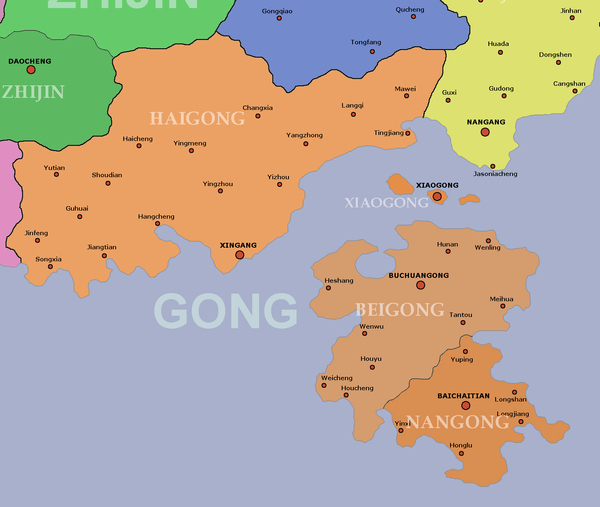 A detailed map of the province and its districts.
Retrieved from "https://micras.org/wiki/index.php?title=Gong&oldid=144422"
Categories: