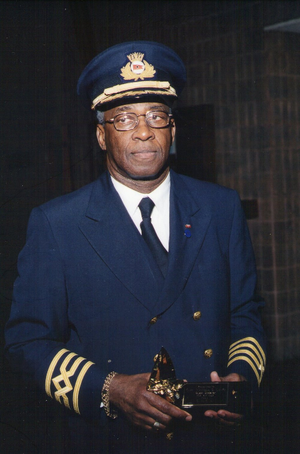 Captain Bernard Kayyk (Ret), is the commander of the Expedition Fleet.

The Golden Sunset Expedition is a venture financed by the Saint Andre Trading Company with the intent of finding a suitable area to establish a new Natopian colony. It is being led by Captain Bernard Kayyk, a retired Natopian Navy officer.

Bernard Kayyk (born 7.V.1616) is a retired captain in the Natopian Navy. He was born in Butter Cow City, Flaventia, to a wealthy family. He spent many summers on the family yacht visiting coastal towns on Borders Bay. Kayyk was qualified to operate sailing vessels by the Butter Cow City Marina & Club by the age of 15. He enrolled in the Newport Naval Academy and joined the ROTC program, graduating in the top 5 of his class. Upon graduation he began a tour of duty as a lieutenant aboard a Ziegeland-class carrier. By 1647 he was serving as the XO of a Trident-class minelayer during the War of Nicki's Minaj. He was captain of a Natopia-class destroyer during the War of Lost Brothers. Towards the end of the war, in 1657, he suffered an injury, and was reassigned to serve as commandant of the new naval base on Marinette island, Transegale. He has served as commandant for ten years before retiring. He lived as a private citizen for several years until 1671. The Kalirion Fracture allowed for a greater expansion of SATCo's trade fleet and routes, requiring a sudden need for experienced naval officers. Kayyk was offered a consulting contract in 1672, but did not accept until 1673, negotiating a high salary and the right to command a ship should he choose. Kayyk's experience as a commander and administrator quickly saw him become one of SATCo's most valuable consultants.

In the late months of 1677, SATCo began exploring the idea of settling a new colony after having their colonial governing rights restored to them in the new Natopian legal code. Several locations were shortlisted and several names attached to various expeditions. Kayyk was the consultant charged with exploring the feasibility of a colony along the eastern lowlands of Cibola. Eventually the Cibola plan was approved and Kayyk was named captain of the expedition, which was planned to disembark in early 1678, before the end of the first quarter.

Captain Kayyk's expedition fleet consists of several older hulls, decommissioned from the Natopian Navy and sold to SATCo. Four Ziegeland-class tactical carriers were commissioned into the SATCo Merchant Marine Fleet for this venture. They were named for former successful and unsuccessful SATCo colonies. Each vessel carried a marine mercenary unit of 50 men and a survey group of 10 cartographers, climatologists, geologists, and zoologists. The fleet is currently in the final preparation stages in the Port of West Bay.