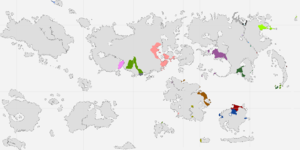 The Gangdiguo Special Economic Zone is an economic zone within the Jingdaoese Empire through which trade is handled with Jingdao's allies. It's administrative capital is Gangdiguo. As the Empire has access to most of the necessary resources, its trade with the rest of the world had always been limited. With the establishment of the Common Market, and later its integration in the Port of Vines, those became exclusive partners.

Treaty ports as exception to the rule

Trade is strictly regulated and monitored to avoid smuggling from illegal and dangerous contraband from non-USSO states. The two Treaty Ports of Cangshan and Jasoniacheng, which received a special status when trade was opened between Alduria and Jingdao in 1672 AN, were the sole exception to the rigorous and strict trade restrictions.

In an exceptional showcase of willingness to cooperate with the neutral Aldurians, the Grand Secretariat agreed with the establishment of the treaty ports (in turn, two treaty ports were established in Alduria). In 1681 AN this special status triggered a small crisis within the government, as Alduria joint the Raspur Pact. The commotion and unrest concerning the issue was swiftly subdued, as the Shanghu faction put pressure on the Heavenly Court to keep the trade route open. It became a point of disagreement between the Shangu and the other political groups. Unrest and riots against Aldurian residents increased during the 1684's, while the position of the Diwang Zhang San was weakened.