The GAV(P)-6 Zephyr Mark 1a is a highly manoeuvrable and agile endo-atmospheric and exo-atmospheric patrol vehicle utilised by the Raspur Pact for long distance patrolling, reconnaissance, and precision strike operations.

The Zephyr originated in a force of eleven "saucer bombers" developed by the Natopian demesne of Universalis for the Atmospheric Corps of its "Starfleet".[1]

The original Saucer Bomber design was a vertical take off and landing (VTOL) craft of an unusual type. It represented the bomber aircraft of the atmospheric corps, and was originally intended as a spacefaring vessel. The saucer used relatively common chemical-ion motors, as utilised by the N-1 Fighter. These saucers were fitted with large cargo bays, wherein bombs could be stored for future drops on targets. The targeting system comprised of laser guidance and homing radar which allowed the bombs, dropped vertically from chutes installed in the saucers central mass, to achieve exceptional pinpoint accuracy. The advantage these saucers provided was that their hovering ability allowed them to position themselves nearly stationary over a target, insuring better accuracy and/or continued bombardment of a particular target.

The ambitions effort to maintain a spacefaring fleet however ultimately bankrupted the demesne obliging it to be placed under the administrative protection of the Ministry of Security. The saucer bomber force was accordingly laid up in hermetically sealed storage facilities on the Laval Peninsular of Tapfer and largely forgotten. 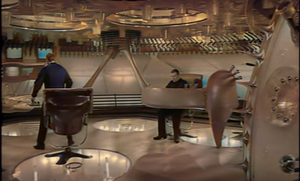 The operations centre of the Zephyr was redesigned to be spacious, well armoured, and typified by a distinct retro-futurist aesthetic.

The War of Lost Brothers and the chaotic Natopian mobilisation changed that. With the Natopian Navy and Spacefleet over-stretched it was considered imperative to locate and return to service all viable platforms. As early as 1654 a Natopian Defense Force (NDF) inspection team had toured the storage facilities in order to assess the condition of the saucer bombers. However the controversies arising from the Emperor's absence and the efforts of the Legalist faction in the Frenzy, led by Zakyyr Moonoak, to oppose the efforts of the Chancellery to begin mobilisation had hamstrung these efforts.

With the rescue of the Emperor and the restoration of a modicum of efficacy to the Court of the Verdant Gardens (site of Natopia's Ministry of Defense), the task of taking the saucer bombers out of mothballs was revisited. Ironically, now that the NDF was taking an interest, the saucer bomber storage sites had already been secured by teams dispatched by Isabella Kalirion in the meantime. An unfortunate stand-off was averted by her subsequent elevation to the position of Secretary of Defense, adding the Court of the Verdant Gardens to the security and justice portfolios already received from the Chancellery.

With absolute power to dispose of the matter as she saw fit, Isabella dictated that the saucer bombers were to be restored to operational status and utilised by the Ministry of Security in support of the Demesne Armed Forces (the self-defence forces of the provinces) which had borne the brunt of the war effort in Arboria, Port Saint Andre, and Elijah's Rest.

It was however discovered that the chemical-ion motors had degraded during their period of storage and would be inoperable. Replacements were not available as the Spaceyards required those spare engines and components as were available for the repair and maintenance of the fighter and scout vessels of the NDF, which had been severely stretched by having to respond to a range of global crises, today over Dalmajica, tomorrow over Carama Bay, the day after Talenore or Elijah's Rest.

Impatient, Isabella contracted with Auger Industries to resolve the engines debacle. Auger Industries in turn contracted with the Shirerithian Red Bear Corporation to source two dozen gravimetric engines of the type that the company had been systematically over-producing since the escalation of the Sxiro-Jingdaoese Confrontation in the early 1640s.

The original consignment of Gravimetric engines was lost when the SATCo convoy was attacked, and the cargo vessel carrying them sunk, by the Jingdaoese Captain Saigo as it passed to the north-west of the island of Istvanistan.

Dingo shuttles were dispatched to collect the next consignment individually. It was at this point that Augur Industries disappeared down a rabbit hole of its own making by opting to develop a new propulsion system rather than rely exclusively upon the gravimetric drives, which they considered to be crude and overly susceptible to electromagnetic interference. It was said the programme's lead designer had become overexcited at a cheese and wine party, stimulation sometimes had this effect on the rather secluded gentleman, when he first conceived of the Tachyonator as a doodle on a port-stained napkin.

Perhaps allowing themselves to be overly influenced by the programme leader's control of the development budget, the R&D team of Auger Industries gamely set to work trying to bring his inchoate vision to the semblance of reality.

While the propulsion team was driving itself to distraction with the design of the new drive mechanism, the armaments team was enjoying a rather better run of luck upgrading the saucer bombers weapons package. The air battles of the early stages of the war had demonstrated that the Natopian preference for directed energy weapons, in preference to air to air missiles and ballistic projectiles, was suboptimal when contending against overly rugged airframes such as the Jingdaoese Raven fighter. Instead a series of eight railguns were installed. These would accelerate inertially-guided projectiles along trajectories timed to intersect with on-coming aircraft and or missiles, although this latter option was considered by some to be optimistic. The installation of these weapons reduced the payload of the saucer bombers considerably. Left with a single centrally-aligned vertical ejection chute, the armaments team adapted this to become what they termed a "vertical ejection mass-driver", again working along a similar principle to the railguns. The expectation being that this additional acceleration, combined with the gravitational pull of the planet, would greatly enhance the kinetic effect of the remaining payload.

The propulsion team meanwhile accidentally broke the fabric of time and space on a couple of occasions. Fortunately this appears, so far, to have gone unremarked upon.