The Fröjaländarläger Malexanderstad is located 4 km outside Malexander on the railway line. A makeshift railway station has been erected by the camp, separate from the standard Malexander station. This has, of course, made regular railway trips from Malexander almost impossible and replacement buses are in use for regular passengers. There is also a small airport some 8 km away from the camp. 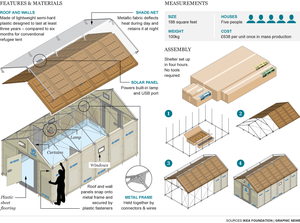 The flatpack housing facilities for the refugees

Thrrough the makeshift station and Malexander Airport, the designated Froyalaners (so called Treaty Froyalaners) from the other Raspur Pact states arrive (none are resident in Elwynn). The average arrival rate to the camp from these modes of transport is about 500 per day who travel with Elwynnese transit visas. If no Froyalaner leaves the camp before all have entered the camp, it is estimated to take 332 days for all Froyalaners to have been processed and found refuge in the camp. At such all Froyalaners are expected to have arrived at Fröjaländarläger Malexanderstad by the conclusion of XIII.1680.

On 18.III.1680, the first 500 people were sent across the border to Francia, to camps in Iskander, Martinstadt (Mürtin) and Tsofnhafen. Buses were sent to Mittlere Stadt where the Froyalaners disembarked to new buses to take them to their new Frankish camps. If the average of 500 persons crossing the border to Francia per day is kept, it was expected take until the end of II.1681 until for all Froyalaners to have crossed into Francia. However, the very next day, 19.III.1680, the Frankish government repudiated the Treaty of Concord with Elwynn (having already been repudiated by teh Unified Governorates prior to the breakout of the Second Amokolian War). The Elwynnese government suspended further transfers to Francia until the legal status of relations between Elwynn and Francia had been resolved. As such, the expected plan of full transfer to have been completed by the end of II.1681 is on hold, and is likely to be delayed. The first wave of deportations was subsequently found to have commenced without proper authority, the consequence of an Ayreonist clique in the Commission of Foreign Affairs going rogue and acting off its own authority. As a judicial purge subsequently gripped the Elwynnese Curia, revised proposals concerning the timetable for deportations, now scheduled to begin on 05.V.1680, were communicated to Brandenburg.

The Internal Security Bureau of Benacia Command provided had provided Elwynn with a solemn undertaking to gather the 166,328 Froyalaners specified in the Treaty of Mittlere Stadt at the bailiwick of Malexander by no later than the 5th day of the 5th month in the year 1680, to await deportation to Francia. The provisions of the treaty specified humane treatment for detainees, obliging the ISB to provide facilities to which the Froyalaners had been unaccustomed since the bloody days of the Auspicious Occasion.

The garrison, providing perimeter defence and site security, was drawn from the Black Legions Military Mission in Elwynn and comprised of 1,361 legionaries, 210 non-commissioned officers, 12 subalterns, 2 field officers, and a representative of the Political Directorate of Benacia Command. The personnel assigned to the defence and security of the camp were subordinate to the Szodanin-Uihmaz (Sovereign's Corps) of the Black Legions while the administration of the camp was conducted by the Internal Security Bureau of Benacia Command. The administrative staff provided by the ISB consisted of 700 personnel, including 70 female camp supervisors.

The camp itself fell within the area of responsibility of the Elwynnsbrigad 10/3 Utasia, a brigade of the Union Defence Force assigned to manning the Vigilamus Network covering the frontier between Francia and the Raspur Pact aligned powers of Elwynn and the Unified Governorates. The brigade comprised of three regiments of Huskarls, Elwynnese heavy infantry, supported by a flak battalion and a supply detachment. The camp was situated within the rear area of the 1008 Húskarlarbataljon, in spite of its name a regiment of 1,200 infantry with 15 Horjin CV56 and 135 Pod armoured personnel carriers, supported by a Flak detachment based around a light anti-aircraft squadron of 120 gunners, 15 Trump radar-guided autocannons, and a Panopticon Horus aerostat.

A flight of 4 R-1 Whirdlebird attack helicopters from the 4th Tactical Aviation Division were also assigned to provide reconnaissance and close air support in the Malexander bailiwick region.

In the weeks and months prior to their scheduled deportation to Francia detainees were encouraged to produce their own camp magazines, and a weekly Valtian-language newspaper, Libertas, was published by Benacia Command specifically for the camp residents. Lectures by visiting speakers were arranged, and libraries of curated digital media were provided. All of these activities were intended to demonstrate the principles of freedom of speech and political and racial tolerance, by the systematic betrayal of which the colonising Froyalaners had necessitated the liberation struggle waged against them. Detainees who were deemed to be suitable for more intensive instruction were invited to attend seminars at the Malexander campus of the People's Academy.