Difference between revisions of "Foreign relations of Alduria" 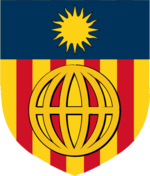 The coat of arms of the Department of State.

The diplomatic foreign relations of Alduria are conducted by the Department of State, headed by the Secretary of State. The Prime Minister and numerous other agencies and officials play a role in setting the foreign policy of the Republic of Alduria.

Alduria has been neutral in international relations since its foundation. Its foreign policy declares the preservation of Alduria's independence and welfare its most important objective. Alduria holds to "armed neutrality" in which it deters aggression with a sizeable military while barring itself from foreign deployments.

Alduria avoids alliances that might entail military, political, or direct economic action. Only in recent years have the Aldurians broadened the scope of activities in which they feel able to participate without compromising their neutrality.

Alduria tries to maintain diplomatic relations with almost all countries, although many Micran nations remain uncontacted by Alduria. The country has no major dispute in its bilateral relations.