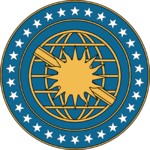 The seal of the Department of State of Alduria-Wechua

The foreign affairs of the Alduro-Wechua Federation are conducted by the Council of State of Alduria-Wechua collectively as the nation's collective head of government. The decisions made by this body are implemented by the Department of State, headed by a Secretary of State. The rest of the Council of State, the President of the Government, and numerous other agencies and officials also play a role in establishing and implementing the foreign policies of the Federation. In many instances, other institutions and businesses in the Federation have a voice and a role in the formulation of the national foreign policy through liaisons and relationships with the private and public sectors of the economy such as the heads of labor unions, business associations, and other special interests.

Alduria-Wechua is currently a member of the Micras Treaty Organization, inheriting Alduria's membership in that body as its successor state. Alduria-Wechua is also part of the Raspur Pact, one of the largest alliance systems in Micras. Its membership in the Pact goes beyond its founding, as both Alduria and the Wechua Nation individually were members of the Pact prior to the creation of the Federation.

The current Secretary of State is Vicaquirao Alvarez of the Coalition for Federal Progress, since 1685 AN. He is also currently the Vice-President of the Government.

The Alduro-Wechua Federation was formed in 1685 AN with the Proclamation of Punta Santiago. The new Federation has assumed both the Treaty commitments and partnerships that both Alduria and the Wechua Nation had. This included Alduria's membership to the Micras Treaty Organization, as well as the individual memberships of both nations to the Raspur Pact.

Alduria-Wechua's foreign policy emphasizes its participation in multilateral organizations, particularly especial is its active membership in the Micras Treaty Organization and adoption of its treaties such as the Micras Intellectual Property Protection Act (MIPPA), the Treaty to Establish the Intermicronational Commission, and the MTO Convention on the Laws of the Seas. The assistance provided by the international community during the 1673 AN-1677 AN Aldurian water crisis further has impressed upon its successor state to serve as a major contributor to international humanitarian and disaster relief efforts.

Alduria-Wechua sees its commitments to the Raspur Pact as among its highest priorities in foreign affairs. As a member of the Raspur Pact, it has access to vast commercial markets, foreign capital, and raw materials in nearly every continent of Micras through the free trade zone among members of the Pact. 60% of its foreign trade is to Raspur Pact members, mainly Constancia, Natopia, Ransenar, the UGB, Sanama, and Elwynn.

Cooperation with other countries remains important to Alduria-Wechua. Despite its membership in the Raspur Pact, Alduria traditionally maintained a close relationship with various members of the USSO namely Krasnocoria and Jingdao, in particular at the height of Aldurian neutrality during the starting years of the country. Trade and cordial relations with former USSO friends continue, but trade with the USSO has dropped considerably from its high point in the early 1670 AN's. Relations with Jingdao remain cordial, while relations with Krasnocoria worsened over their treatment of LGBTQ citizens and their involvement in the formation of Mishalacia, then associated with Vanic nations.

Alduria-Wechua is a strong proponent of the freedom of navigation, meaning that ships flying the flag of any Micran nation shall not be attacked, interfered, intercepted or hindered by other states, except for in special and reasonable circumstances.

The principal objective of Alduro-Wechua foreign policy is the safeguarding of the independence and welfare of its people. Below this overarching goal, Alduria-Wechua has also identified some additional foreign policy objectives, mainly the need to alleviate need and poverty in the world, promote respect for human rights, maintain its commitments to its Raspur Pact allies, and promote the preservation of the planet and its natural resources.

These objectives reflect the history of both Alduria and the Wechua Nation, individually and collectively. Both nations had a long history of economic, political, and social cooperation between themselves. During the 1673 AN-1677 AN Aldurian water crisis, the Micras Treaty Organization arranged an international humanitarian mission to help end the water crisis. The Wechua Nation once was a failed state and many of its citizens fled the anarchy to many nations, including Alduria, Constancia, and Natopia. These events further impressed upon the Federation and its government to serve as a major positive contributor to international humanitarian and disaster relief efforts. The Alduro-Wechua moral obligation to undertake social, economic, and humanitarian activities that contribute to world peace and prosperity comes from these events. This is manifested in its bilateral and multilateral diplomatic activity, assistance to other countries, and support for the establishment and formation of a Micran body of international law, particularly humanitarian law.

The advancement of LGBTQ issues and elimination of discrimination is a particularly prominent agenda item in Alduro-Wechua foreign policy, helping form the bedrock of many relationships, namely Natopia and Sanama.

Alduria-Wechua is a strong proponent of the freedom of navigation, meaning that ships flying the flag of any Micran nation shall not be attacked, interfered, intercepted, or hindered by other states, except for in special and reasonable circumstances. This originates from Alduria's previous cooperation efforts with the USSO, in particular Operation Hugo Grotius.

Alduria-Wechua grants protection and residence to people under serious persecution in their country of origin due to their religion, nationality, sexual orientation, gender identity, membership in a particular social or ethnic group, or political opinion, or who are unable to return to their home country for other humanitarian reasons. Links with the Department of Interior (the agency that handles the citizenship and residency process) and the Border Guard are maintained to ensure a smooth and speedy process for refugees.

Alduria-Wechua has inherited the Aldurian "Law of Graces", an established tradition from the founders of Alduria that granted any and all refugees from the Wechua, Alexandrian, and Caputian diasporas citizenship automatically and often including land or other property in the country, in exchange for their commitment to build and defend the country.

The Department of State is the federal executive department responsible for carrying out Alduria-Wechua's foreign policy and international relations. Its duties include advising the President of the Government, administering the diplomatic missions, negotiating treaties and agreements with foreign entities, and representing the Federation in international organizations such as the MTO.

Diplomatic and Humanitarian Mission to Tiegang

Alduria-Wechua is a signatory to the following international agreements and treaties:

When Alduria and the Wechua Nation formed the Alduro-Wechua Federation, a panel of constitutional advisors, diplomats, and legislators were convened to review the treaties both nations had entered into prior to federalization. Alduria-Wechua has assumed treaties and agreements from both of its now constituent Regions.