The Flag of Senya was adopted in 2010 to replace and to update the previous flag of Senya.

The flag is predominantly green, which represents safety, fertility, and the environment. The top left canton features a green square with rounded corners on a white field, which indicates peace, with a triangle cut into the bottom of the square, to indicate progress. Two small yellow squares are also present, which represent the instruments of government; the president and the NDF. 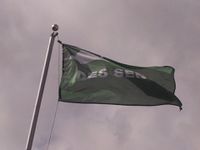 The flag of Senya flying on a flagpole in Svorgas, Senya.
Retrieved from "https://micras.org/wiki/index.php?title=Flag_of_Senya&oldid=149062"
Categories: