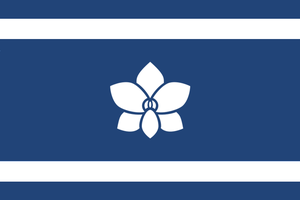 The flag of the (free) Elwynnese Republic is a banner of deep blue. Two parallel white stripes follow the length of the flag. The outline white orchid is charged in the middle of the flag.

The orchid represents the Goddess Elwynn. The two stripes along the length are the two Elwynn rivers that make up the Elwynnese Urheimat. The colours of the flag, white and blue, come from the names of the two rivers Elwynn, the White Elwynn and the Blue Elwynn.

The flag was adopted in 1672 upon Elwynnese independence. It was designed by Stephen Lewis. The symbology of the Elwynnese national flag, whatever its form, has been the same since the first flag's adoption in 1460s. Following the end of the Second Elwynnese Civil War, the authorities in Free Elwynn adopted the flag.