Five-Year Plans of the Wechua Nation 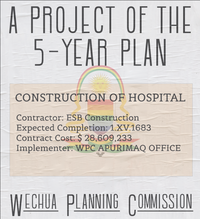 Projects part of the Five-Year Plan of the moment often carry posters and billboards detailing the project to the public.

The Five-Year Plans were established by the Inkap Rantin Vicaquirao Alvarez through the different regional and national sessions of the Regional Committees appointed by the Sapa Wechua after the Restoration to survey and establish plans for reconstruction and development from a localized community level all the way up to the national level. These regional Committees would then send detailed plans and proposals, along with market research, economic reports, and demographic figures to the Wechua Planning Commission, which would assemble the Five-Year Plans in consultation with industrialists, historians, scientists, economists, and legal scholars. The plans have played a leading role in establishing the foundations and principles of the national and regional reconstruction plans, mapping strategies for economic development, setting growth targets, and launching political and economic reforms.

The Five-Year Plans were enacted by Alvarez with the advice of key Wechu economists, political and military leaders, and entrepreneurs. They were originally proposed by the Social Democratic Club and the Guild of Building Trades.

Five-Year Plans (FYPs) are centralized and integrated national economic programs. They were employed with great effectiveness in Constancia. The Constancian experience, witnessed first hand by the Sapa Wechua and the Government-in-Exile set up in Nivardom, made a big impression on the Wechu disapora based in Constancia. It was in exile that a Committee for the Restoration was convened by the Sapa Wechua, which included representatives from every conceivable interest group in the Wechua Nation, and at the suggestion of the Social Democratic Club and the Guild of Building Trades that a national economic development program be instituted upon the recapture of the ancestral lands in Keltia.

Immediately after the capture of the ancestral lands, the restored government launched its first FYP in 1673. The FYPs are developed, executed, and monitored by the Wechua Planning Commission. With the Inkap Rantin (Wechua prime minister) as the ex-officio chairman, the commission has a nominated deputy chairman, who holds the rank of a Cabinet Minister.

The First Five-Year Plan was aggressive in building large quantities of housing across the country.

The First Five-Year Plan was presented to the Council of the Nation and approved right after the Restoration, which mainly focused on the development of the primary sector.

The total planned budget was allocated to seven broad areas: irrigation and energy (27.2%), agriculture and community development (17.4%), transport and communications (24%), industry (8.4%), social services (16.6%), rehabilitation of landless farmers (4.1%), and for other sectors and services (2.5%). The most important feature of this phase was the active role of the state in all economic sectors. Such a role was justified because immediately after the end of the Wechua Sorrow and the Restoration, the Wechua Nation was facing chronic problems, with a deficiency of capital and a low capacity to save among them.

Five Institutes of Technology were started as major technical institutions. The Higher Education Grants Commission was set up to take care of funding and take measures to strengthen higher education in the country.

Planning and development of the Wechua National Redoubt were begun, complementing other defense plans created by the government and Raspur Pact military advisors.

This plan was created to accomplish several tasks, including:

The Wechua government had determined that it was important for the gross value of agricultural exports to increase to help fund further rural and agricultural development. Through government policies and preferential treatment from trade partners in the Raspur Pact, the gains from 1679 to 1682 was a modest 35%. Since the beginning of the Second Plan, the country saw increases in capital construction over those observed during the first Five-Year Plan and also saw significant increases in the industry (doubling output value) and income (workers and farmers, increase by as much as 40%).