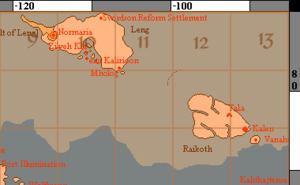 The UDF garrison on Leng, primarily tasked with protecting the Boreal Air Bridge's interchange at the enu Kalirion air station, comprised of approximately 1,200 personnel drawn in detachments - chosen from their parent regiments by lot - from the 23rd Maritime (Coastal Artillery) Division. Personnel assigned to the Leng Garrison would undertake a three month tour with the promise of a month's leave and a twelve month period of exemption from further deployments in the Boreal wastes. They were supported by a small detachment of mechanical and electrical engineers supplied by the Black Legions primarily concerned with the maintaining the operational readiness of the flying station whilst non-operational aspects such as facilities maintenance, logistics, accommodation, and catering were handled by a multitude of ESB subcontractors who counted as non-combatants.

The other significant Elwynnese presence on the island was the Svordson Reform Settlement, home to 12,000 inmates undergoing penance for various infractions dating as far back, in some instances as the Auspicious Occasion, overseen by 3,300 cudgellers - the ubiquitous paramilitary police of Elwynn.

The sudden insertion of a Jingdaoese marine brigade onto the island obliged the UDF to rush reinforcements to the island in the form of a squadron of 16 GAV-5(P) Nereid patrol craft and a flight of 4 F-9 Ashavans along with their hurriedly flown-in ground crews.

In addition, with reports that the Krasnocorian aircraft carrier, the KB Nikolaj, was making an approach towards northern waters, the Northern Banner Group's Fleet Command Officer ordered all available ships in theatre to get up steam and head out of port at the earliest opportunity. Task Force Z (5 Elwynn-class Corvettes, 12 Swift-class Offshore Patrol Vessels, 2 Type XIV U-Boats, 2 Viviantia-class LSV) proceeding south-westerly from Vanaheim, and Task Force H (5 Elwynn-class Corvettes, 5 Viviantia-class LSV) fanning out from the Cimmerian Isles and following a north-easterly course, would conduct a converging sweep of the approaches to Leng, seeking to locate the Nikolaj and force it to turn about. Comprised of ships drawn hurriedly from flotillas and squadrons hitherto acting independently under Pact and UDF control, the two task forces had limited experience of combined naval operations - the hunt would be a test of their ability to work seamlessly together.

Trapped far behind the line of the pack-ice, which can be found far to the south, the Leng plateau is so singularly and thoroughly inimical to human survival that it would seem ostensibly preposterous to propose that brigade-strength battlegroups might be about to wage a struggle for its possession. Even during the faltering summer optimum temperatures would seldom exceed freezing point even under the all-day glare of Atos. Indeed, the months of the all-day sun are about the only time when it is safe for humans to venture up from the coast and onto the plateau - for in the darkness of the winter months possession of the island reverts back to the spindle-limbed horrors that lurk in the tortured crevasses and jaggedly unnatural rock formations which scar the snow-bound landscape. It is no wonder then that the gloomy imagination of the dwindling and misshaped, malformed, populace of the isle are much given to fantastical ravings about malevolent entities, slumbering in sepulchral lairs deep beneath the frozen earth. Fraternisation with indigenous inhabitants has, as a matter of policy, generally been kept to a minimum in view of the deleterious impact upon morale of garrisoned troops evidenced by previous interactions.