Etourney is one of the two semi-autonomous territories of the Confederate States of Floria and is the only territory which is predominantly Alexandrian-speaking. It was discovered after a long voyage from Florian settlers fleeing from the Xhusor War and other wars on the mainland. It currently consists of the island of Etourney and the island of Tanbury. These main islands are also accompanied by uninhabited islets and rocks covered with snow and glaciers. The territory has its own financial, legal and judicial systems, and the power of self-determination. Florian cultural influence on the island is evident in its use of Florian as one of the main languages and the Florian Dollar as its primary currency. Additional cultural commonalities include driving on the left, access to Florian TV channels, a school curriculum following that of the Confederate States of Floria, and the popularity of Florian sports, including rugby league, ice hockey, football and the most popular sport on the island, Amorian football. 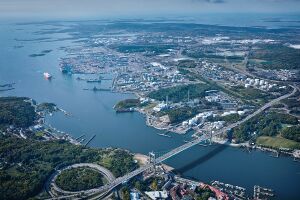 An image of St Edwin's during the early winter.

Etourney was founded on the 18th June 2017 after a long voyage from Florian settlers fleeing from the Xhusor War. It was then given full autonomy by the Florian government. The capital of the territory was announced to be called St. Edwin's and it would have a population of 30,000. As the capital was being built Etournians settled in caravans and tents.

The province has special autonomy from the Florian government as the province is predominantly French-speaking. Etourney has control over its borders, culture, and economy. However, it is not allowed full diplomatic relations any other state without permission from the Florian government. The local parliament is currently called the Etourney Round Table and there are 10 seats available each election.

Etourney nationwide has a subarctic climate making it the coldest part of the Florian Republic. During the early winter months, hard winds and snow plague the territory throughout. St Edwin's, the capital has a high exposition of sunlight and the city receives the most sunlight compared to other Etournian settlements.

The Confederate States of Florian Armed Forces is responsible for the defence of the territory.

The territory's economy is based mostly on agriculture in the summer, tourism and hospitality.

Etourney only has two professional football teams, Etourney FC which compete in Super League Football and FC Rovers who compete in the Florian Championship. Other professional sports teams in Etourney include Etourney Scorpions and St Edwin's Cavaliers (both rugby league). The biggest sports team on the island though is Etourney Avalanche currently competing in the Intercontinental Hockey League. Etourney operates one semi-professional football league, the EFL which provides future players for the FFL, the highest level of Amorian football on Micras.