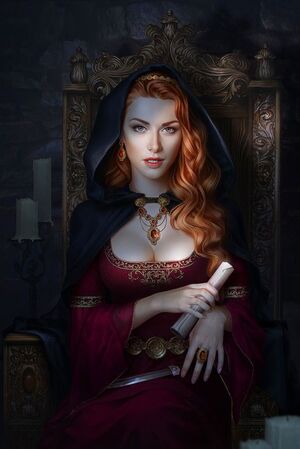 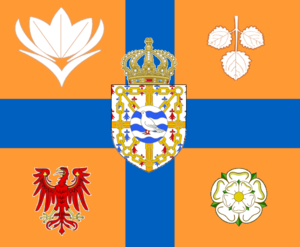 Royal standard of the Queen consort

She married Arkadius Frederik Gustavus des Vinandy in 1681 AN, making her Kaiserin Gemalin of Francia and Queen consort of Batavia.

Esther Fatima Gudrid is named after Esther Ayreon-Kalirion, Fatima al-Osman and Gudrid Thorbjarnardottir. But in the Raspur area she is known as Esther Esposito (Tellian for "exposed"), which in Shirerithian tradition is given to caste-shamed deposed individuals from the nobility. She was removed from the nobility upon the unlawful annulment of her parents marriage (as only legitimate children inherit noble dignity in Shirerithian law). Prior to the this, she was known as Lady Esther of Anglia in Shireroth (to differentiate her from her grandmother Esther Maryam Amirdokhtar), after her Elwynnese earldom Anglia, given to her by her father.

Esther Fatima Gudrid has five elder brothers - of which three are still among the living. The eldest four are from her mother's first marriage with the late Prince Nathananiel of Natopia, quadruplets who were begotten by artificial insemination and born in 1630.

They are, in order of birth:

Her fifth brother was born in 1635 to Thorstein Noah Hallbjörnsson and Noor as-Salaam bint Daniyal Umra Suleiman. The only daughter and youngest child.

Esther was courted by her second cousin Arkadius Frederik Gustavus des Vinandy since 1679 AN. That led to an engagement. On 10 Louwmaand 1681 AN the couple married in the Kaupmaðrhǫll Castle in Stormark.

With this marriage she became Kaiserin Gemalin of Francia and Queen consort of Batavia. As well as the stepmother of Arkadius' children from his first marriage. The following children were born from this marriage:

Until the age of 12, Esther's childhood was prosperous, full of all the luxuries the Elwynese monarchy could provide. She was made Earla of Anglia by her father. When she was six, her mother Noor was elected Kaiseress of Shireroth. During Noor's reign, the Shirerithian monarchy transferred from being appointed/elected to a dynastic. As such, Esther became a princess of Shireroth and in line to the Shirerithian throne. Even though her mother was residing in Shirekeep, Esther was living with her father in Eliria. Due to Noor's busy schedule, they did not see each other very much. Despite this, Esther always speaks well of her mother and remembers loving her very much. In 1650, when Esther was only 12, her mother was killed by her half brother Adam in Ura'Bos. This caused much trauma to Esther and her family.

During the Froyalan Genocide in 1651, at the age of 13 when her father's rule in Elwynn was toppled, she escaped with him to Stormark. Her uncle, Audun Joel (ex kaiser Hjalmar Redquill), died during the battle. Audun Joel was an identical twin to her father Noah, and was thought by the opposing forces to have been Noah. Esther remained a Shirerithian princess and in line to the throne until the annulment of her parents' marriage in 1653. The annulment has been declared illegal in Storish and Frankish law, but remains uncontested in Shirerithian and Elwynnese law. If the annulment had not taken place, she would be number 7 or 8 in the Order of Succession to the Kaisership (depending on the status of her older brother Vilhjálm).

In Stormark, she finished her education. She proved adequate in diplomacy and was given a posting as the Storish ambassador to Caputia upon reaching adulthood. She worked thereafter for the diplomatic corps in Stormark, as well as taking care of her late mother's estate in Stormark (where Noor, through her marriage with Noah, had amassed many riches) on behalf of her nephew Vidar Ayreon, the young child kaiser of Shireroth, and thereafter, upon Ayreon's adulthood and subsequent assassination, on behalf of her grandnephews.

In the late 1670s, Esther was courted by King Arkadius IV of Batavia (who also became the Frankish emperor around the same time). They formalized their relationship in 1679 and were engaged to marry. Their wedding is due in 1681 AN.

The so-called annulment of her parents' marriage is a source of contradictions. According to Storisch law and after the judgment of the Froyalan Tribunal, the annulment of the marriage is considered unlawful. But the Elwynnese and Shirerithian right dispute that.