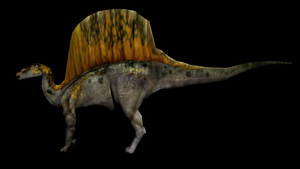 Pictured: Ranched extensively across Corum, especially to the west of Lake Norton, the meat of the Eeli-Illt-Eda is regarded by most Pallisicians as being preferable to the meat of other livestock.

A large, herbivorous creature, Eeli-Illt-Eda is believed to be one of the most numerous species in the entire continent. Large and slow-moving, this creature features large, bone-like plates along its back, which are believed to act as solar panels, providing warmth energy to the creature in a relatively cool environment. Eeli-Illt-Eda are ranched in great abundance in western Corum, in particular in the Realm of Redwood-Brugge.

Found in only 5 out of 20 Pallisican cities in Corum, this species is uncommon. 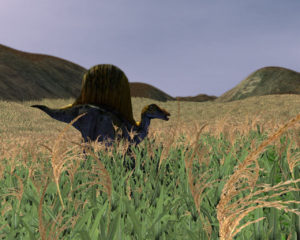 The Eeli-Illt-Eda was first domesticated by the Gamesman peoples of western Corum.

The only one of Corum's many large animals to be historically, extensively domesticated, the Eeli-Illt-Eda is raised in herds of dozens to hundreds of individuals, by ranchers who raise them for their sweet and savory, tender meat. Although it has never been officially confirmed, it is believed that it was a desire for the meat of the Eeli-Illt-Eda which motivated Erlo Sinders to order his son, King Lucien IV, to settle the area of the modern day Kingdom of New Zimia in the mid-700s WG. 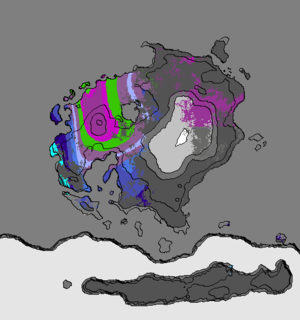 The range of the Eeli-Illt-Eda extends across 64.26% of the landmass of Corum. As such, it is among the continent's most proliferate species. The majority of the species' range - 69.34% - lies within the continent's Sub-arctic and Temperate climate regions, while almost 25% lies in the Mediterranean climate regions of Northern Corum. One topic of great interest to scientists relates to the presence of Eeli-Illt-Eda in the polar regions of the eastern Freeburg Isles, and Hypernostria.

The Eeli-Illt-Eda is common in lowlands as well as in mountainous areas. Tremendous herds of the species can be observed across the Lesser Riponian Mountains.