The Province of Eastern Sanilla is a province in eastern Sanama. The province has a population of eleven million people and an area of 96,000 km2, making it the second most populated and fifth largest province. The province was formed in 1679 with the passage of the new federal constitution and is coterminous with the previous East Sanilla and Coastal Sanilla regions. The province stretches along almost half the southern coast of Sanama and contains several large cities. Large parts of the coastline are covered in dense tropical forest while the inland has smaller forests divided by farmland, mostly ricefields, pineapple and sugar cane farms. The province is bordered to the west by Central Sanilla, to the northwest by Thanatos, to the northeast by Drak-Modan and to the south by the Gulf of Khaz.

The mainland is very wide from west to east, but also rather narrow from north to south. The mainland is about 730 kilometers wide, if the island of Estarisa is included the width increases to about 890 kilometers. The height from north to south is between 210 kilometers at its widest and 40 kilometers at its narrowest. If the islands are included the width increases to about 315 kilometers. The coastline is mostly covered in a dense tropical forest which is protected in many places from forestry. The inland has smaller non-tropical forests divided by ricefields and pineapple and sugar cane farms. There are also grazing areas for cattle and sheep in the easternmost part of the province. The province also contains three large islands, namely Ž, Kayalëkada and Estarisa. 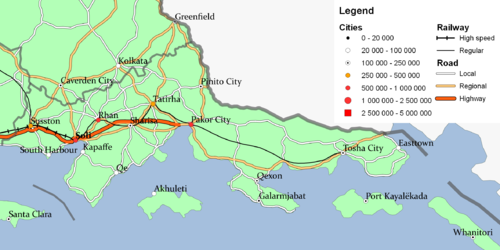 Eastern Sanilla is largely rural, but with a few larger cities and urban areas, especially the capital Soli, Rhan and Pakor City, all with over half a million inhabitants. The coastal tropical forest sees limited and sustainable forestry, while the smaller forests inland are more heavily exploited. The farms in the inland grow rice, pineapple, sugar cane, corn and wheat, with cattle, swine, chicken and sheep farming dominating in the far east. Tanisha Foods is a major actor in the province, together with smaller farmers and meat producers. Due to the South Benacian Pipeline terminating in Soli, it has an extensive oil refinery industry and a major port for export and import. The area is also receiving federal support to establish a petroleum products industry, like plastics and various chemicals. The largest employer in the province is Sanama Arms Industries in Soli. The Woolridge Shipping Company headquartered in Susston is a major shipping actor, and Apishe Group based in Pakor City is a growing conglomerate. The federal government is also a large employer in the province. The Sanaman Army with the 9th Army Division and 3rd Army Aviation Brigade in Tosha City, and the Sanaman Armed Forces Medical Center and Sanaman Army Academy in Soli, while Galarmjabat hosts the III Air Force Wing and other units of the Sanaman Air Force, and the 2nd Fleet Command, Galarmjabat Naval Base, Z and Estarisa Naval Stations from the Sanaman Navy, as well as the Z and Estarisa Coast Guard Stations from the Sanaman Coast Guard.