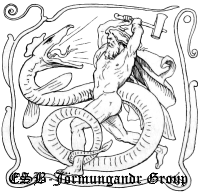 Logo of the ESB-Jörmungandr Group

The subsidiary of a Shirerithian multinational corporation active in the Euran states of Constancia & Raspur since 1636 AN.

The ESB Euran Directorate grew out of the Industrial Archaeology Programme's (IAP) expedition to Vey which was led by Marcellus Paixhans. Although the ESB Group maintained a genuine interest in recovering Babkhan weapon designs and supply caches with which to further the Shirerithian rearmament programme, the expedition served primarily as a cover for quasi-covert deliveries of weapons, munitions and spares, as well as technical experts and advisers to prop-up the Constancian Armed Forces during their war with the Empire of Jingdao.

Marcellus was dispatched, as a somewhat improbable archaeologist, to provide advice and assistance to the Armed Forces of Constancia in repelling a Jingdaoese invasion. His background as a naval engineer design and organise the rapid manufacture of improvised explosive devices (IED) that could be floated into the 'Sandy River' of Southern Eura, the main supply artery and line of advance for the Jingdaoese advance into the Euran interior. This contribution alone was reported to have delayed the deployment of Jingdaoese warships upriver by several days. Marcellus next turned his attention to improvising weapons systems for the land way, following a successful Jingdaoese landing at the Constancian river town of Portus Felix. Contributions to the land war included designs for improvised armoured vehicles, 'hell cannons' or home-made artillery and land-based equivalents to the floating IEDs that were known as Infernal Machines. In so doing, the 'Vey Expedition' contributed to stabilising the front line in the Euran War at a moment when it seemed that the Kingdom was about to collapse in the face of the Jingdaoese onslaught.

As the war progressed, and the expedition became the primary vehicle for Shireroth's barely covert involvement in the conflict, the ESB board of directors spun off operations in Eura from the IAP and consolidated them as within a new directorate, with Marcellus naturally being the candidate for elevation to the role of director.

Marcellus oversaw all of the ESB's involvement in post-war reconstruction through that office and became a close ally of the Constancian dictator, Andreas Metaxas, a connection that ultimately resulted in Marcellus being caught amongst the ill-fated party of delegates ambushed and slaughtered alongside Metaxas in the opening stages of the Siege of Nivardom.

After an interval, Euran operations were taken over by Sarah Dravot, the niece of the Group's chairman, who soon formed a close working relationship with Constancia's Autokrator.

In 1659 the ESB Group negotiated the largest slave purchase in history, purchasing the right to the entire Black Traveller community from the Khanate of Krasnarus for four trillion Erb ($62M). The entire debt servicing edifice of the Group strained to absorb the cost of the acquisition, but, at the stroke of a pen, the ESB Group had found the pool of manual labourers required for its ambitious programme of works in the Thema Oranjēsiōn.

The Euran Directorate is made up of five main departments:

The Directorate was also put in charge of numerous commercial ventures that the ESB Group has been increasingly engaged in since the rise of Primo de Aguilar to power in Constancia.