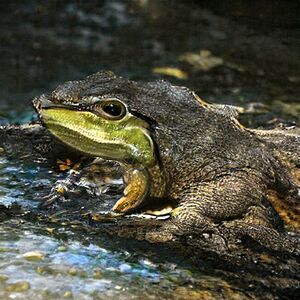 During mating season, or at times when it is especially desperate for food the male Deve-Adred-Nas extends its eyes outwards on two long, fleshy stalks. Most of the time however, its eyes are set in their normal position. 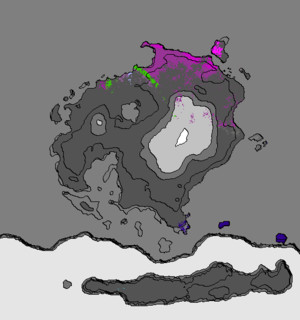 In red, the known range of the Deve-Adred-Nas.

Commonly seen grazing on the leaves of the Tiji-Oname, the Deve-Adred-Eda is a very large, peaceful creature, that lives along the region's shorelines, and in its wetlands. Featuring four short legs, and two eyes which at times can be extended outwards on tall stocks, this creature is most well-known for the deep, resonating croaking sounds which it emits during mating season.

Found in 10 out of 20 Pallisican cities in Corum, this species is common.