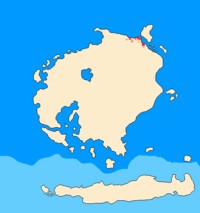 In red, the location of the Depths of Anatina.

Located along the western edge of the Yasutomi Strait, the Depths of Anatina is one of Corum’s several lesser wilderness areas. Prior to the establishment of the Wallis Islands by the Free State of Haifa, the Depths of Anatina was an extremely popular hideout for pirates operating in the southern Sea of Storms. Today, the region which is home to a large population of kralians, is peaceful and quiet, even despite the fact that in recent years, practitioners of the arts of Face-Changing have increasingly come to regard the Petal-haunted Depths as an ideal place to practice their dark and gruesome magic. 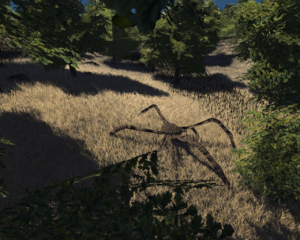 Pictured: The Depths of Anatina are renowned for being the home of a huge number of Petal-Hial-Eda. In some places, the woods seem to be crawling with the frightening creatures.

The Depths of Anatina lie between the Pallisican cities of Fort Donnet, Cannassas, and Southman, and dominate the Region of the East, in the Kingdom of New Zimia.

One of the more biologically diverse regions in Corum, the Depths of Anatina is home to at least seventeen noteworthy species, including, but not limited to the following.