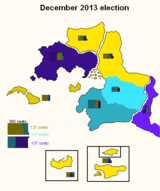 Results of the December General Election

The December 2013 General Election in the Commonwealth of Hamland was simulated on the 4th of December 2013 and gave the most seats to the Social Liberal Party. The election occurred at the beginning of Hamland's policies against Jingdao and this meant that the previous government continued due to the crisis. This meant that Duke Sinclair of the PIP remained Prime Minister.

This electoral term was notable for the continuing work on providing a multi-lateral response to the Jingdao threat, the reintroduction of Royal National Bank, being the first election with Neo Patrova as a member alongside a number of international treaties being signed by the Commonwealth. Neo Patrova's entry gave an important boost to the SLP's support helping them win the election.