Corum Electric was first established in 32.43 PSSC (5936 ASC) following a decree by Queen Evahn I that the government of Passio-Corum would authorize the creation of a Regional Investor which would be responsible for extending electrical services to the cities of Corum which lay beyond the nation's borders. Today, Corum Electric operates as a semi-autonomous regional investor on the Port of Vines, which represents the economic interests of the non-Bassarid inhabitants of northern Corum. 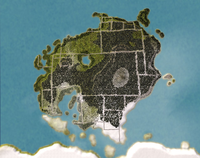 Corum Electric uses the ancient system of roadways which connect the cities of northern Corum to extend electricity and other goods and services to the continent's independent city-states.

Corum Electric relies very heavily on the network of ancient roadways which extend across Corum to provide goods, electricity, and services, to the underrepresented peoples of northern Corum.

The New Zimian War League plays an important role in protecting the infrastructure which Corum Electric relies upon to provide its various services to the independent city-states of Corum. To this end, the War League maintains a small, specialized presence in several independent Corumian city-states including Al-Qatari and Cambridge.

Corum Electric does not maintain any formal protected areas.