Confederation of States around the Sovereign Oceans 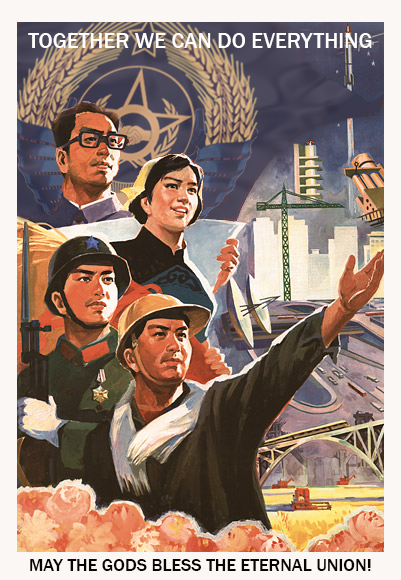 A Jingdaoese propaganda poster to celebrate the Union's achievements and the foundation of its successor, the Confederation.

The CSSO, officially known as the Confederation of States around the Sovereign Oceans, and sometimes shortened to Confederation, was a proposed confederal state which would have stretched across Micras. Because of two of its larger Constituent States Jingdao and Krasnocoria, a majority of its population would have been located on the Apollonian continent. The capital of the country, Leylstadt, is also on the same continent (connecting Jingdao and Krasnocoria) and acts as a distinct Constituent State. Major administrative and economical centres are, nonetheless, spread throughout several continents, and especially the Bassarids have taken the lead in investing in its fellow States' economies.

The country has a small central government, which is located in the Confederation's capital, which de jure oversees the policies of its Constituent States. The majority of the states have a monarchical system and reject democratisation, which led to the nation being dubbed the Imperial Confederation by several bureaucrats and newspapers.

The Confederation has its roots in the Hammish Civil War, when high tensions between Shireroth and Passio-Corum alarmed the Jingdaoese. Seeing the necessity of protecting the peace and stability against perceived Shirerithian aggression and the collapse of the small Jingdaoese centered Blackrock Pact a year earlier, made the establishment of the USSO in 1645 AN possible. With the signing of the Treaty of Voorpost between Jingdao, Passio-Corum (which became the Bassarids), Xang Muang, Gerenia and Craitland former allies and even enemies came together to protect their mutual interests.

The War of Lost Brothers (1653 - 1657 AN) proved a heavy test for the Union, in which it gained some minor land gains. The aftermath of the war brought forth an increase of new members, and led to an post-war economical and financial boom, thanks to the opening of (parts of) the the internal Jingdaoese market to investments, mainly from the Bassarids. As living standards and production of goods skyrocketed, the 1670's also saw the Kalirion Fracture in the west. The collapse of its traditional nemesis was seen as a moral victory among most peoples of the Union and boosted moral.

As part of an attempt of the politicians to avert foreign threats, revisions were made to the Union Treaty in 1674 AN. A series of reforms, like a rotating presidency, was envisioned to strengthen cooperation. By then, Kan Zen had guided the Union for 24 years. Well aware of its weaknesses and strengths, the Chairwoman called upon the member states to think about reforming the Union into a more stable confederal state. By then, the Union had lost several of its members - Gerenia and Xang Muang - to internal instability. Strengthening (con)federal oversight had to avoid the loss of its members.

In 1683 AN, dignitaries of the six Full Member States and two Observer States gathered in Leylstadt to ratify the the Confederation Treaty.

The Confederation is self-sufficient, thanks to its Common Market, but is open to trade to countries who are interested. Former Union states Craitland and Nova England both are part of the so-called Union Bloc. While currently the Constituent States have their own currencies, plans are developed to streamline it into one Confederation Credit.

Foundation of the Confederation (1683 AN)