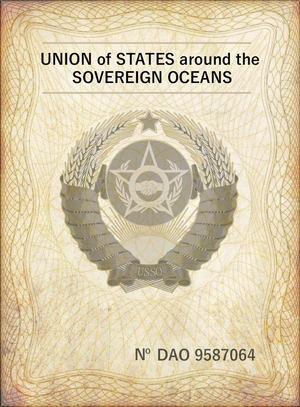 An example of the first page of an Union Passport. These are all the same, whatever Union State you are citizen of

Citizenship of the Union of Sovereign States around the Oceans (USSO) is afforded to qualifying citizens of member states of the USSO. It was introduced by the Union Treaty of July 2017 and has been in force since July 2017. Union citizenship is additional to national citizenship and guarantees rights, freedoms and legal protections to all of its citizens.

Union citizens have the right to free movement, settlement and employment across the USSO. Citizens are also free to trade and transport goods, services and capital through Union borders, and on the Common Market.

The Union itself does not issue ordinary passports, but ordinary passport booklets issued by its member states share a common format. The emblem of the Union is always found on the second page (and in most cases on the booklet).