The Castellum Avalon is the main residence for the King of Arcadia in Koningsrots. The word "castellum" is Latin for castle, indicating all castles in Arcadia. Similar to "château", with which the castles in Batavia are indicated.

The name "Avalon" is based on a confusion of tongues of King Arkadius II des Vinandy of Batavia, which the Batavian colony on Cibola mistakenly called Avalon instead of Aragon.

The palace complex consists of different rooms, such as the throne room. A familiar part of the palace is the patio. Central in the patio is an elongated pond, surrounded by sunken gardens and a gallery that gives access to reception rooms. The patio was later covered with a marble floor.

Furthermore, the palace complex has its own domus, a Catodraal, where gatherings for the court are held. Surrounding the palace complex are extensive gardens. A part of the love story of King Arkadius IV and Princess Clara took place in these gardens, namely their first kiss. 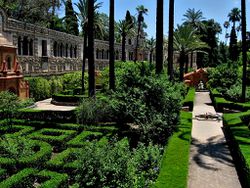 The gardens
Retrieved from "https://micras.org/wiki/index.php?title=Castellum_Avalon&oldid=103866"
Category: