The Buzzard C-61 is a Kasterburger fighter jet, developped by the Litkov Aviation and Technology Facility. It was produced in late 1660 AN for the Luchtmobiele Brigade of the Kasterburger Defence Forces 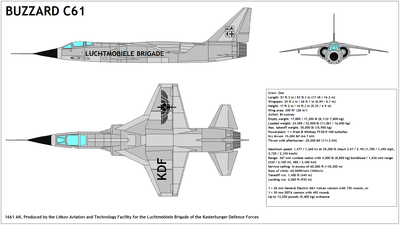 The Buzzard is service in limited service with the air arms of three sovereign nations (Kalgachia, Kasterburg, Los Liberados) as well as formerly with the security forces of one quasi-autonomous Imperial State in Shireroth, (Northern Realm). The publicly notified number of air frames in service therefore are as follows:

As noted elsewhere, it is expected that the actual number of airframes is significantly in advance of the numbers cited in open source materials.

The Kalgachi evaluation of the Buzzard has thus far been that the stub-winged aircraft is not without its challenges: noting its violent proclivity for fatal stalls or spins at even modest angles of attack, the unpredictable effect of external payloads upon its handling characteristics in the transonic range, and runway instability due to its narrow landing gear configuration and the unusually high speeds required for takeoff and landing. The aircraft's limitations constrain its role in Kalgachi service to straight-run intercepts, reconnaissance missions, single-pass ground strikes and electronic operations with any attempts at dog-fighting, close ground support or other manoeuvre operations considered an unacceptable risk to trained pilots and aircraft which were obtained at considerable expense to the state.

Having been purchased by the Northern League's commissioner of the peace during the brief hiatus in the Elwynnese Civil War afforded by the White Elwynn Accords, ten C-61 airframes are known to be in service with the League's successor state, the Northern Realm, although the conjecture is that a greater number were purchased disassembled by the Cimmerians and Verionists in anticipation of the future collapse of the accord. The C-61 has not yet seen combat in the skies over Northern Elwynn, although the absence of deconfliction mechanisms between the Imperial Forces garrisoned in northern Benacia and the various state forces of the Northern Realm, has resulted in the occasional near miss. In this crowded air space periodic tensions around the city of Fieldburg have resulted in several instances where Buzzards and the F-8 Shrike, the increasingly venerable main constituent of the Imperial air arm's fighter force, have been effectively jostling each other at high velocities and altitudes in pursuit of an advantageous position, although no-one has characterised these vertiginous manoeuvrings as dogfights per se. In spite of the Buzzard having the on paper superiority in performance characteristics over the Shrike, Imperial aviators quietly maintain that the advantages of superior weapons load, training, experience, doctrine and numerical superiority, would see them through in any confrontation. "Quantity has its own quality", one Air-Tribune was heard to huffily exclaim when the question of the Buzzard's notional superiority was raised.