Difference between revisions of "Brosatamış"

Brosatamış is a Birgesh traditional mixed gender sport in which two teams of five players (three males and two females) challenge each other for 100 offensive actions (split into two halves of 50 offensive actions) trying to get the largest number of the available offensive actions to have more attempts to score by catching a fly ball hit by the teammate batter. The number of points are determined on which area of ​​the field was the attacking player at the moment of the catch. The object of the game is to score more points than the opposing team. 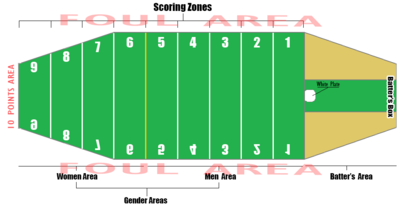 Brosatamış games are played on a sort of rectangular field measuring 90m long and 46m wide (approximately) divided in 9 lines that determine the scoring zones. Almost at the center of the field there is a yellow line (center spot) that separates the gender areas (men area and women area). 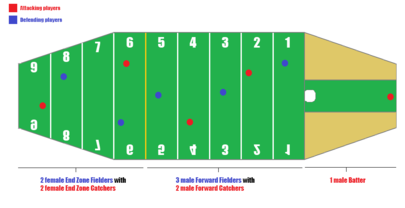 Players on the field

Batter: must be the first male componing of the team and he become a Forward Fielder only in defensive actions.

Fielders: they are those players scattered around the scoring zones (5 in defense and 4 in offense).

The defending players are placed in the following positions:

The attacking players are placed in the following positions:

The players must wear matching jerseys and trousers (or skirts for female players). The typical Brosatamış jersey is sleeveless and features the player's number and name on the back, and the team logo (on the front) is in the center of the chest. The players can also wear caps.

The offensive players can catch the ball with both hands. They don't wear gloves.

The defense players are those who try to catch the fly ball hit by the batter of the opponent team in order to stop their offensive action and switch to attack. If a defense player misses the ball after the catch (or an offensive player misses the ball and fails to pick it up or the ball hit by the offensive batter ends up on the filed without bieng catch or touch from both teams) it won't stop the action and the defense player should try to pick up the ball and throw it to the other teammate (the one on the 1 point area) in order to reach the white plate and touch it before the batter (like touching the bases in baseball). In this way,the defense team will gain 1 point and switch to the offensive action. If the defense team fails on touching the white plate (because the batter of the opponent team has touched it before or because any offensive player has intercepted the ball),the attacking team will continue with another offensive action.

The defense players must catch the ball with one gloved hand.

The defense players can also tackle the offensive players in order to prevent a score.

The ball is spherical and made of leather and is around 12cm in diameter. The bat is like a baseball or cricket bat but with the broad tip.

Winning brings the team 5 points,a draw brings in 3 points and the losing team will score no points.