The The United Kingdoms of Bosworth and Gascony (commonly known as Bosworth) was a micronation of the Micras community that was culturally based on the Tudor period of English history. It was active from February 25, 2006 to September 26, 2009.

Following a period of inactivity which began near the end of May 2009, it was decided on July 17, 2009 that Bosworth would dissolve as an active micronation[1] . Bosworth was subsequently removed from the Micras world map on September 26, 2009 during the Version 14.0.0 update. 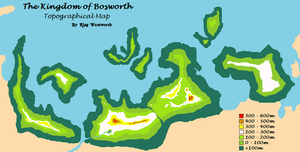 Bosworth was divided into seven duchies:

The economy of Bosworth was based largely on Tudor society, the primary historical theme adopted by the micronation. In July 2007, an economic system based on farming was unveiled, with each citizen granted a certain number of sheep as a means of assigning wealth. The system was later expanded to include other livestock and crops as a means of establishing economic class, based on sheep acting as the lowest-cost commodity. The order of livestock and crops based on most-to-least valuable was as follows[2]:

A series of resource maps were developed for the Kingdom showing the distribution of each of the above-noted commodities. The economy was further supported by the military being tasked with building grain stores and improving pasture fencing in order to separate livestock grazing areas from food crop fields.[3]

The economic system failed to gain traction within Bosworthian society and fell out of use shortly after its implementation. In 2009, consideration was briefly given to launching a new system based on the exchange of activity and culture (i.e., the creation of a certain cultural item would be paid for by a certain number of posts being made at the forums); however, the system was never implemented.[4]

A rudimentary system of Honours was introduced in Bosworth during its final year, consisting of three awards[5], for which citizens and, in some cases, foreign nationals qualified.

The highest military honour, awarded for conspicuous bravery in the presence of the enemy, was the George Cross. It consisted of a silver cross capped with a royal crown, with St. George and the dragon in the centre. The words "For Valour and Gallantry" encircled St. George and the dragon. The medal hung from a purple ribbon. The honour was only to be bestowed upon members of Bosworth's military.

The Cross of St. Edmund was the highest civilian honour, and it was bestowed on individuals in recognition of great acts of heroism or conspicuous courage in circumstances of extreme danger. The medal was a bronze cross with a lion, the national animal, sitting in the centre. The lion was surrounded by the words "For Gallantry". The medal hung from a dark blue ribbon. The honour was only available to Bosworthians.

The third honour was permitted to be bestowed on both Bosworthians and foreign nationals alike. The Most Distinguished Order of St. Joan and St. Jean was granted to individuals who had shown distinguished service to Bosworth, the micronational community, or humanity as a whole. The medal consisted of a circular piece of bronze bearing the image of St. Christopher, which was encircled by the words "God Calls Me". The medal hung on a white ribbon with diagonal purple stripes.