The Battle of Kares Island, named for the nearby island in Gerenian South Keltia, was a large-scale fleet action between the Shirerithian Musican Fleet and two naval task forces of the New Zimian War League which took the form of a series of engagements between the 6th and the 13th of January 2017 (edit to insert AN and PSC dates here). Although the encounter ended with a tactical Shirerithian victory the Zimian Navy was able to take considerable solace from delaying the Musican Fleet's progress towards the relief of Talenore, during which time food shortages began to become apparent on the island for the first time. 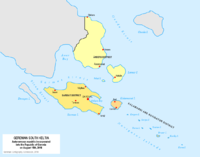 An approximate location of the battle. Kares Island can be found in the bottom right corner of the map.

The spirited Pallisican effort, which saw repeated attempts at pressing home the attack - even when the odds were distinctly unfavourable, impressed the Musicans sufficiently that thoughts of pausing the fleet's transoceanic odyssey to plunder Sóekänogru in the manner attempted at Blore Heath were set aside in favour of regrouping and continuing directly towards Talenore.