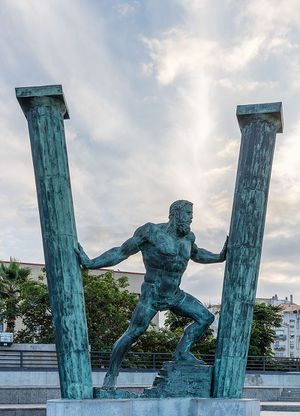 Monument "Plus Ultra" in front of the headquarters of the company

The Batavian Trading Company (Batavian: Bataafsche Handelsmaatschappij) is a Batavian trading company with its head office in ’s Koningenwaarde. The current CEO is Pieter-Jan Terlinck.

The company's motto is Plus Ultra (Always further).

The current company sees itself as a continuation of the historic Batavian Company (Batavian: Bataafsche Compagnie). This company played an important role in trade between the various colonies of the Batavian Empire. With the fall of this empire, this company also collapsed.

The founding of the Batavian Confederation was the reason to bring the company back to life.

The trading network is supported by trading posts and local offices. Overview of trading items:

To regulate exchange rates, the company makes its own currency, this currency is called the Golden Kruys. The coin is minted in the mint in Hofstadt, especially with gold from Helderbourgh.

The company has its own militia to protect ships, grounds and buildings.