Difference between revisions of "Batavia"

Batavia, officially the (Sixth) Kingdom of Batavia, (Dutch: Koninkrijk Batavië or Zesde Koninkrijk Batavië), is a forum and wikibased country in the southwest of Benacia. The country borders Francia in the north, Kalgachia in the east, Unified Governorates of Benacia and Kasterburg in the southeast and the Great Western Sea to the south and west. In addition, the country has territory on the Madison Isles and Jasonian Archipelago. The capital of Batavia, which is located at the Koningenbaai, is called 's Koningenwaarde, which is translated as Kings' Worth. Other important and heavily populated cities are Davignon and - more recently - Kingsrise.

Originally, the several feudal states were unified in 1513 AN by Regent Jodocus van Haltna and organised into the Free Batavian States. The nation saw a series of changes in its administration, especially a progress of democratization during the first ten Norton years after its unification. 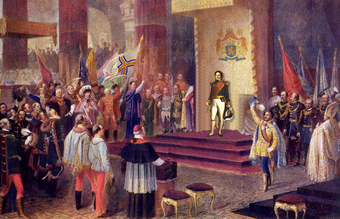 The coronation ceremony of Arkadius IV meant the official start of the Sixth Kingdom.

It reached a peak in influence and power during the Second Kingdom Era (1523 - 1579 AN), in which it successfully played a moderate - and sometimes leading - role in international diplomacy. It succeeded in maintaining good relations with Shireroth and Stormark throughout the 16th century, while carving out its own oversea empire on Micras.

Batavia saw a decline in power at the end of the sixteenth century, and a final collapse in 1614 AN, after which its territories were carved up between Stormark, Jingdao, Shireroth and -later - minor successor states, such as Kasterburg. Within Batavia, nationalist tendencies continued to linger, represented by the Free Batavian Society, lead by later Prime minister Joachim Mackay.

The Sixth Kingdom came to see the light in 1669 AN, after the coronation of Arkadius IV, and saw - by means of various treaties - the return of large parts of its original Batavian territory under the Batavian flag.

The Kingdom is dominated by a wealthy bourgeoisie and nobles, who reinstated the parliamentary constitutional monarchy. The king, Arkadius Frederik Gustavus des Vinandy, retains considerable emergency powers over the parliament. The Royal Court rejected the title of King of Batavians in favour of King of Batavia, with which it rejected certain aesthetic reforms of the so-called Burgerkoning (Citizen King), Arkadius III. Despite the fair amount of power vested in the Monarch, most power resides with the elected parliament, which consists of an elected Lagerhuis (House of Commons) and the Hogerhuis (House of Lords), which is appointed and presided by the King himself.

The Batavian government - led by the prime minister - promote friendship with Shireroth and Jingdao, while actively sponsoring rapprochement with former colonial possessions. Batavia forms, together with Arcadia, Francia, Helderbourgh, Kasterburg and Los Liberados, the Batavian Confederation (Dutch: Bataafse Bond) which seeks to unify nations with a Batavian heritage.

The name "Batavia" comes from the mythical story of the origin of Batavia. According to this mythical story, the Batavians come from the "good island", or as in the primeval Batavian "batawjō".

Flag and coat of arms

The Batavian flag consists of a hemmed cross of orange and blue on a white surface. This flag has been in use since the Second Kingdom. It is a retrenchment of the flag that was used during the First Kingdom. Later, other variations of this flag were used. Read more about the flag of Batavia.

The kingdom has a rich collection of maps. Even when Batavia appeared on the MCS map, a map already existed. Then Batavia was situated east of the RefoBliek, from where most of the Batavians came from. After the claim on Micras was accepted, a map of Batavia on Micras was drawn. That map has been the basis for the following detailed maps:

First map of Batavia, next to RefoBliek, Aragon and Prussia.

The first large map of Batavia on Micras.

The detailed map of Batavia during the Second Kingdom of Batavia.

The latest version of the new detailed map.

The motto of the kingdom is “Batavia erit in orbe ultima” (Batavian: Batavië zal tot het einde van de wereld blijven bestaan. Common Tongue: Batavia will continue to exist until the end of the world). This motto was introduced at the time of the Second Kingdom.

The national anthem of Batavia (Batavian: Staatshymne) is a hymn of praise on the Batavian land. The melody is in the manner of “Land of Hope and Glory”. The lyrics are as follows:

An alternative anthem, which was introduced during the Fourth Kingdom, was the song "Risen from Ruins" (Batavian: Oprijzen uit de ruïnen). In addition, other songs have been used for parts of Batavia, read more about these songs.

An example of Batavian pride, dating back to the Second Kingdom (16th century): "Batavia, light of the Sector"

In 1513 AN (February 9, 2006) the Free Batavian States (Dutch: Free Batavian States) were founded by Jodocus van Haltna. He came from the Refoweb Republic, or Refobliek, where other Batavians came from. Faya Veronique was crowned Queen, she was very popular because she listened to the people.

The Free Batavian States disintegrated after several unrest, after which in 1520 AN the First Kingdom of Batavia arose. The inactive queen was replaced by Arkadius Leopold des Vinandy, better known as Arkadius I. But the unrest did not stop and the kingdom ended.

In 1523 AN created the Republic of Davignon (Dutch: Davignonrepubliek), an unofficial name for the state that was a preparation for the revival of the kingdom.

The 16th century of the Second Kingdom (between 1523 and 1579 AN) has generally been seen as the Golden Era of the Batavian people: the Empire succesfully became a great power and could influence international crises, participated in major political and economical organisations (like the Small Commonwealth) and waged some successful wars which increased its territory or fame. To the contrary of most nations in that time, the power of the Crown was considerably less than that in nations like Shireroth, Natopia or Babkha.

The end of the 16th century would see the rise of dissent and divide between the population: the Oogstmaand Monarchy and Third Kingdom would soon fall under internal military pressure, while its successor nations would often fail to conciliate the whole Empire's territories.

From 1614 AN and onwards most of its territories were little by little divided among other major powers, like Jingdao (which had been a colony, and later constituent nation of Batavia), Stormark and Shireroth.

In 1661 AN, the Batavian territories saw an increase in militancy among several groups who advocated a free and independent Batavia (like the Free Batavians). Those movements, further supported by Batavians who had fled into the eastern territories (which had opened up after the collaps of Minarboria), became increasingly vocal in local assemblies. States like Kasterburg and the Transbataafsche Vrystaat would eventually pressure the Shirerithian and Jingdaoese authorities in re-establishing an independent state.

With the ascension of Arkadius IV on the Throne in 1669 AN, a final agreement with Shireroth led to the return of Batavian territory in hands of the government at 's Koningenwaarde, while establishing a custom union to strengthen the ties between the Benacian people. The Sixth Kingdom saw a return to many of the values of the First and Second Kingdom: returning its root to a strong parliamentary tradition, while keeping the King as a strong figurehead, while being able to act in times of need. However, as of 1678, King Arkadius has assumed all powers of the Batavian government under an emergency clause in the Constitution, ruling Batavia all by himself.

In 1680 new elections were held for the Lagerhuis and Prime Minister, which restored the democratic order and ended the state of emergency.

A list of the several states, which were Batavia:

As a result of the turbulent history, the Batavians have spread over Micras. As a result, only 19.11% of all Batavians live in the Kingdom of Batavia. A minority of Shirerians live in the former areas of Shirerian Dietsland, Puritanian States and Voltue. And a minority of Jingdaoese in Tianhoucheng ('s Koningenwaarde) and the former Colony of Itteria. 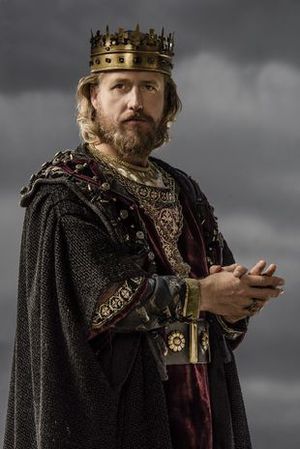 The King of Batavia is Arkadius Frederik Gustavus des Vinandy, from the House of Vinandy. This family has already delivered four kings and one queen since the foundation of Batavia in 1513 AN.

The Prime Minister is the head of the Batavian government.

The Batavian parliament is a bicameral system with an aristocratic element. The Lagerhuis (house of commons) is directly elected every 3 Nortonyears. The members of the Hogerhuis (house of lords) are appointed by the king.

The kingdom is divided into two types of administrative divisions: autonomous areas and lordships.

Originally Batavia was divided into regions (gewesten). In the United Batavian States, some of these regions were transformed into states. When Batavia had possession to roughly the former regions Dietsland and Transingel, this area was subdivided into lordships. With the reunification of the Batavian countries, this division has been further implemented. Because of this, Batavia is now divided into 96 lordships.

Literally, “from here to Qavaqaqqaqqaniitqerqertaq”. Which means: a dilemma or extremely long.

Literally, “The tongue of a vinandist”. Which means: talking about a lot of little rules and details, while loosing view over what's really important. 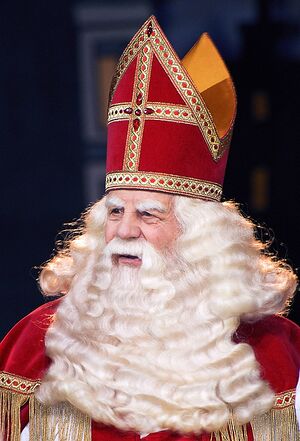 The feast of Sinterklaas is celebrated annually with the giving of gifts on St. Nicholas' Eve (5 Wintermaand) in Batavia. The festivities traditionally begin each year in mid-November (the first Saturday after 11 Slachtmaand), when Sinterklaas "arrives" by a steamboat at a designated seaside town. The steamboat anchors, then Sinterklaas disembarks and parades through the streets on his horse, welcomed by children cheering and singing traditional Sinterklaas songs.

In the weeks between his arrival and 5 Wintermaand, Sinterklaas also visits schools, hospitals and shopping centers. He is said to ride his white-grey horse over the rooftops at night, delivering gifts through the chimney to the well-behaved children. Before going to bed, children put their shoes next to the fireplace chimney of the coal-fired stove or fireplace (or in modern times close to the central heating radiator). They leave the shoe with a carrot or some hay in it and a bowl of water nearby "for Sinterklaas' horse", and the children sing a Sinterklaas song. The next day they find some candy or a small present in their shoes.

Saint Nicholas' Eve, 5 Wintermaand, became the chief occasion for gift-giving during the winter holiday season. The evening is called Sinterklaasavond ("Sinterklaas evening") or Pakjesavond ("gifts evening", or literally "packages evening"). On 6 Wintermaand "Sinterklaas" departs without any ado, and all festivities are over.