Elwynn is divided into 212 bailiwicks, of which 78 are in the Elwynnese Congressional Counties, 57 in the Alalehzamini Autonomous Republic, 43 in SCAR, and 34 in Normark. Each bailiwick is traditionally styled "Worshipful Municipal Corporation of Aldermen of the [official name of bailiwick], Guarantors of its Ancient Liberties", except in Normark, where they are simply titled "Bailiwick of [name]", and Northern Tellia, where it is called "The Most Serene Bailiwick of Northern Tellia" (il Serenissimo Commune de Tellia Settentrionale). 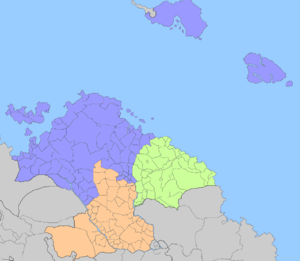 Below is a list of bailiwicks with their population, with their traditional county (if applicable), whether they are in Congress Elwynn (Congress), the Alalehzamini Autonomous Republic (AAR), SCAR, or in Normark, as well as the percentage of native speakers per language. If figure is 0, it means "less than 1%". If the figure is "?", it means an unknown percentage.