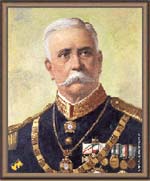 Augusto de Corcovada y Benavides is an Alexandrian Diplomat, Military Officer, Statesman and Noble. His full title is "His Imperial Highness, Augusto, Prince of Corcovado, Archduke of Asunción, Duke of East Barria, Count of Revilla & Zapata, Grand Officer of the Most Ancient and Illustrious Imperial Military Order of Saint Louis the Protector, Grand Officier of the Legion of Honor, Grand Commander of the Most Honourable Imperial Legion of Honor, Grand Commander of the Honorable Imperial Order of Marie-Antoinette, Grand Master of the Order of the Rio Grande, Master of the Order of Santa Catalina".

Augusto Benavides' (once known as Carlos F. Hernandez), first micronational experience was on the SWIM'N (Swiss Imperial Navy) executive branch of the Greater Swiss Empire, a micronation based on universe domination but without a forum, later found the Kingdom of Morovia, where he was elected Representative and appointed National Security Adviser.

Made first appearance on the micronatinal scene in the Republic of San Martin, where began Military career at Altamira's Military Academy, joined the San Martino armed forces and gained the rank of Colonel in the Air Force, later appointed Director of Intelligence and transferred commission to Colonel of the Marines.

When the coup in San Martin, joined the Imperial forces and maintained the recent appointment as Minister of National Defense, supporting the newly established monarchy.

Soon after pledging allegiance to the Emperor, got nominated as Plenipotentiary Ambassador to the late Germania (Cibolenland), and occupied the office for a short term before the hostages crisis and rupture of diplomatic ties between this nation and The Empire of San Martin, when got no other option but to be recalled to San Martin.

After a long period of inactivity in Rio Grande, negotiations began with other micronations to evaluate alternatives of survival ending with the "Treaty of Loredo", in which the Confederacy ceased to exist and became part of the Empire of the Alexandrians. In exchange obtained titles and an appointment in the alexandrian armed forces.

In Alexandria has served in numerous positions and has obtained appointments as Grand Admiral of the Imperial Navy, Minister of Foreign Affairs. Currently commissioned as Marshal of the Grand Imperial Army, and recently appointed as His Majesty's Minister of Defense.

Also holds a seat in the Imperial Parliament for the Overseas Territories.

Have been graced by many honours for his dedicated service to the Crown of Alexandria, as listed bellow:

Due to this has changed names after receiving Letters Patent from His Catholic Majesty, Emperor Edgard II of Alexandria, to Archduke Augusto de Asunción y Benavides and in August 2006 honoured by Letters Patent and received the Title of Prince of Corcovado.

In 2006 was granted honourary citizenship in the Viking Empire of Stormark, where served as Foreign Affairs Adviser, and later filled in as Acting Minister of Foreign Affairs in the abscence of Her Majesty, Empress Asa.

Currently holds citizenship in the United Empire of Landinberg-Schoninreich, where received the appointment as His Imperial and Royal Majesty's Personal Guard Director and honoured by the title of Duke of East Barria.