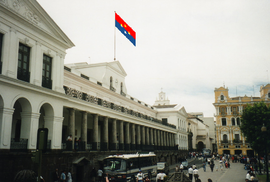 The Asamblea Nacional de la República is composed of 125 members, all of which are elected by the people of Los Liberados in a mixed system in which 65 seats are elected using proportional representation where members are elected on a party list system, with a 5% treshold. The remaining 60 seats are allocated using single-member constituency voting and the first-past-the-post method in 60 electoral districts.

Following the 1669 elections, the following parties are represented in the Asamblea Nacional de la República: