Whereas as the Royal Kingdom of Gotzborg and the Republic of Anthelia have, as neighbouring micronations, previously established good relations.

Whereas both Micronations are party to the Novasolum Treaty and adhere to the fundamental principles and values set forth in that Treaty.

Whereas both Micronations especially value the importance of a strong and creative society, with emphasis upon that community of people which make it dynamic.

Whereas the people of Anthelia have decided, after long and thorough consideration and without interference, to no longer seek and maintain sovereign statehood and that the Republic of Anthelia shall therefore cease to exist as a sovereign and independent micronation.

Whereas the Royal Kingdom of Gotzborg pledges to maintain and protect the culture and heritage of the Anthelian people once the Republic of Anthelia ceases to exist as a sovereign and independent micronation.

1. On 1 February 2007 the Republic of Anthelia shall cease to exist as a sovereign and independent micronation.

Transmission of property held by Anthelia

3. On 1 February 2007 all buildings, properties and holdings of Anthelia shall become the property of Gotzborg.

4. Holdings may, where their function is deemed in excess of their need, be disposed of where the holding is not considered to be a part of Anthelian culture and heritage. However, no such disposal shall be carried through without prior consultation of the Minister of State for Anthelian Affairs as appointed in execution of Article 5 of this Agreement.

Minister of State for Anthelian Affairs

5. There shall exist, as a part of the executive government of Gotzborg, a Minister of State for Anthelian Affairs, appointed by the King of Gotzborg in accordance with Article 19 of the Constitution of Gotzborg.

6. The Minister of State for Anthelian Affairs shall act as facilitator to the transfer of authorities, powers and responsibilities from the government of Anthelia to the government of Gotzborg and shall be consulted in all matters relating to the territory and people of Anthelia. He shall also be consulted when Gotzborg desires to dispose of property formerly owned by Anthelia in execution of Article 4 of this Agreement or when the government of Gotzborg considers, under Article 10 of this agreement, to carry over an international agreement signed by Anthelia to Gotzborg. Furthermore, he shall exercise any other prerogative granted to him by this Agreement.

7. The function of Minister of State for Anthelian Affairs shall be established for a period of one year and may be prolonged if the government of Gotzborg deems such necessary.

8. Upon revocation of the function of Minister of State for Anthelian Affairs in accordance with Article 7, the prerogatives attached to that function as determined and described in Article 6, shall cease to exist.

9. Gotzborg is, under international law, not to be considered as successor of Anthelia and shall not be bound by the international obligations agreed to by Anthelia.

11. A Commission on Anthelian Law shall be established by the government of Gotzborg to determine if some or all Anthelian laws and regulations can be amalgamated into Gotzborgian law, where such would improve and enhance the legal system to the benefit of Gotzborg.

12. The Minister of State for Anthelian Affairs shall preside the Law Commission established under Article 11.

Composition of Territories within Gotzborg

13. The region known as “the Innerlands”, with capital city Helion, as shown in Annex I to this Agreement, shall be composed as a Grand Duchy and named the Grand Duchy of Helion.

14. The region known as “the Alostan Riviera”, with capital city Alosta, as shown in Annex I to this Agreement, shall be composed as a Duchy and named the Duchy of Alosta.

15. The region known as “the Regulan Bay”, with capital city Regulus, as shown in Annex I to this Agreement, shall be composed as a County and named the County of Regulus.

16. The region known as “the South”, with capital city Massilia, as shown in Annex I to this Agreement, shall be composed as a County and named the County of Massilia.

17. All units and persons serving with the Anthelian Defense Forces shall be transferred to control of the respective branch of the Royal Armed Forces of Gotzborg.

18. Should Anthelia secede, all existing vessels which served with the Anthelian Defense Force shall be returned. Those vessels which have been stricken and or paid off shall be replaced with a similarly rated vessel. Further assignment of additional vessels and equipment shall be determined upon secession.

Protection of Anthelian Culture and Heritage

19. Gotzborg shall, as part of the Anthelian culture and heritage, protect - by all possible means allowed and required - the following creations, representations or items:

20. In agreement with the government of Gotzborg the Minister of State for Anthelian Affairs may supplement the list given in Article 19 of this Agreement.

Exchange of currency and ending the circulation of Anthelian Stars

21. Any citizen of Anthelia shall under the conditions set forth in the next paragraph, receive his current financial holdings of Anthelian Stars exchanged for Gotzborgian Thalers. The exchange rate shall be set between [1GTh=1*] and [1 GTh=2*].

22. To receive his current financial holdings of Anthelian Stars exchanged for Gotzborgian Thalers a citizen must, after 1 February 2007, and within a period of four (4) months declare to the Minister of State of Anthelian Affairs how much Anthelian Stars he owns on the Anthelian MX2-system, whether on an account of his own or an account of a private bank operating in Anthelia, and provide evidence thereof.

23. No sooner than 1 April 2007 the Minister of State of Anthelian Affairs shall determine the amount of Anthelian Stars which have been declared and seek confirmation with information held by the Central Bank of Anthelia, if available. The Minister shall then submit a report on the matter to the Royal Bank of Commerce of Gotzborg.

24. Upon receipt of the report mentioned in Article 23, the Royal Bank of Commerce of Gotzborg shall pay out the Gotzborgian Thalers owed to any citizen of Anthelia on an account held in the Gotzborgian MX2-system , whereas, if technically possible, the Anthelian stars held by that same citizen on an account in the Anthelian MX2-system shall be withdrawn from that account by the Central Bank of Anthelia.

25. The monetary assets in Gotzborgian Thalers of the Central Bank of Anthelia, its commercial branch included, shall be transmitted to the Royal Bank of Commerce of Gotzborg. Monetary assets in Anthelian Stars shall be made unavailable, yet maintained and safeguarded as a part of the Anthelian culture and heritage.

Return to sovereignty by the people of Anthelia

26. The people of Anthelia may, under the conditions set forth in the next paragraph, choose to secede from Gotzborg, returning Anthelia to sovereign and independent statehood. It is agreed that such an action shall only be undertaken with the best interests of both Gotzborg and Anthelia in mind.

27. The people of Anthelia can only carry through the act of secession if:

28. The newly established sovereign and independent micronation of Anthelia shall adopt the form of a Republic and the Constitution of the Republic of Anthelia of 4 May 2005 and all other laws and regulations applicable on 31 November 2006 shall be reinstated and re-enter into force. The culture and heritage as described by Article 19 and eventually broadened in accordance with article 8, b) shall also be adopted, maintained and continued.

29. A breach of Article 28 shall render invalid, the act of secession undertaken by the people of Anthelia undertaken in accordance with Articles 26 and 27.

30. Whenever a provision of this Agreement is sufficiently clear so that rights or obligations are conferred upon individual persons, whether natural persons or not, that provision of the Agreement shall be deemed directly applicable and may invoked before a competent court of law. 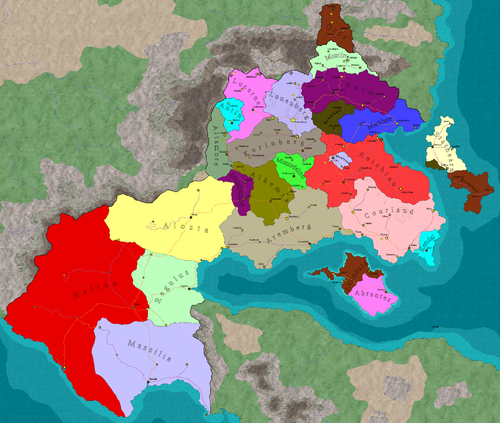