Sanama is since 1691 divided into 14 administrative regions, three autonomous countries and four territories. The administrative regions are directly administered by the national government since federalism was abolished in 1687, and have no regional government, but are instead areas through which the national government coordinate policy and provide certain services. The regions, countries and territories are in turn subdivided into 120 provinces with local governments. As a unitary state, the autonomy the countries enjoy are ultimately granted to them by the national government. However, these provisions in the constitution are entrenched and can only be amended with the consent of each affected country. Western Shimmerspring remain a territory directly administered by the national government, as does the Sanaman Antarctic Territory, while the Federal Capital Territory has become the National Capital District, which despite its name is a territory, separate from the provinces and the countries. The regions of Fatehpur Sikri and Niyi are special cases, dubbed metropolitan regions with regional elected assemblies and executives.

Before 1679, Sanama was divided into ten administrative regions and 69 autonomous cantons. The cantons were further divided into around 8,000 communes, which cooperated if needed in districts. The regions had no elected bodies, and were used for statistical and administrative purposes. Several cantonal confederations existed though, with various tasks and responsibilities. The Cisamarran Confederation is an example of such a confederation. 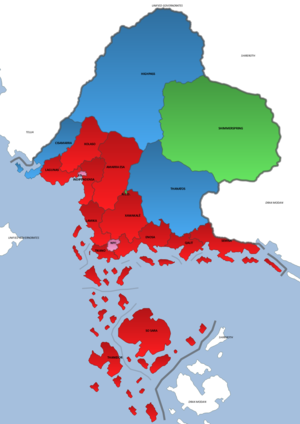 The top level subdivisions are in turn subdivided into provinces, in Cisamarra termed comune, in Highpass ward,in Thanatos county and in Fatehpur Sikri and Niyi borough. 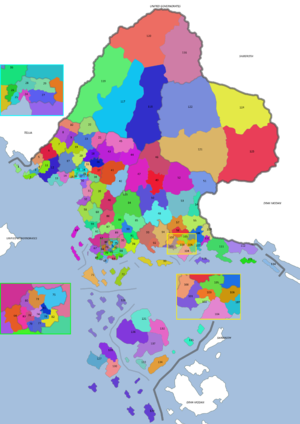