Absentia is currently a Barony in the Duchy of Yardistan currently ruled by Gilrean, but it has only recently reappeared as a territorial entity.

The Empire of Absentia was located in the northwest of the mainland of Puritania, across the strait from New Puerto Rico.

The major achievement of Absentia was the construction of the Starship Improvise using DSSI technology. The Improvise was in deep space when Puritania fell, and still exists.

Absentia, according to Grand Duke Ryan and as confirmed by Emperor Jacobus had become part of the Grand Duchy of Lac Glacei. Lac Glacei and all dependant terrtories were annexed by the Federal Republic of Cyberia on May 30th, 2007.

On the decolonization of the FRC, Absentia passed to the Imperial Republic of Shireroth. 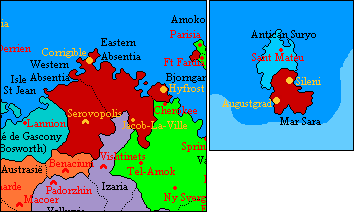 In March 2008, Duke Jacobus found himself in a bit of a pickle. H4773r 3lfs0n, the historic Baron of Vorpmadal, had requested that his Barony be shipped to Brookshire post haste so it could be reunited with its historic Lunatic lands. The Baron at the time, Benkern, Jacobus himself and H4773r decided that this was agreeable, provided the County of Mar Sara, the sole County of Vorpmadal at the time, remained Yardistani. This left Jacobus with a problem - what to do with Mar Sara, and the former Baron of Vorpmadal, Benkern?

Far to the South, Mar Sara's inclusion in this Barony might seem odd, but it makes perfect sense when you consider one of the two main reasons for this Barony's creation was a holding place for Mar Sara which at the time was a Floating County attached to no Barony. Mar Sara has since been re-united with Yardistan.

Western Absentia had long been Prodigy's stomping ground, and was home to his Doom Arena of the Wastes, where all kinds of death-oriented games take place. Eastern Absentia hosted the marriage between its Countess, Gilrean, and Oroigawa Koreyasu. These two Counties are located on the mainland of the continent of Benacia.

Northern Absentia, also known as Forgotten Absentia or Oblivion, is an island off the coast of Benacia. It was completely forgotten by every Baron until Duke Benkern pointed it out and created the County officially (see here). It's still awaiting a real name and Count.