The 2017 Gotzborg Baseball season commenced on July 27, 2017. In total, each of the 12 participating teams will play 2 games against each rival, for a total of 22 regular season games over an approximate 4-week period. The final regular season games will be played on August 21, 2017.

An All-Star Game between the Northern Division and Southern Division will take place on August 8, 2017. The winning team of that game will determine which league has home field advantage during the Kilder Cup championship series.

In preparation for the regular season, a 12-game Spring Training pre-season schedule was played by each team, consisting of a game against each other team within the Gotzborg Baseball League, plus a second game against it's rival.

The indicated Team 1 is the designated rival of the accompanying Team 2, and vice versa.

The first week of the season consisted of each team playing 3 games. The Schwabach Colonials maintained their pre-season dominance of the league, remaining undefeated at week's end. The Schaffhausen Locos were winless after their first 3 games, while the Southern Division continued to generally outperform the Northern Division. 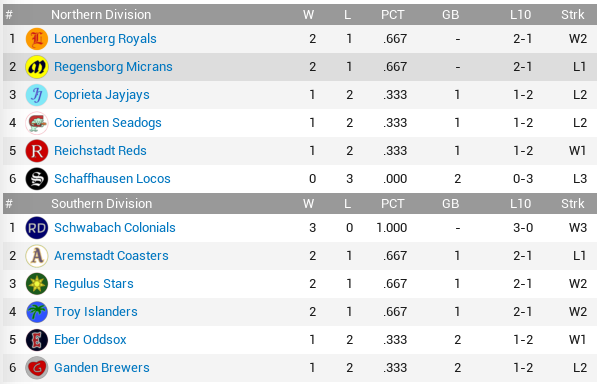 With the conclusion of Week 2, each team had played 10 games apiece heading into the All-Star Break. The previously-dominant Colonials had a hard-luck week, losing their exclusive grip on first place in the Southern Division and creating a 3-way tie with the Aremstadt Coasters and Troy Islanders. In the Northern Division, the Locos rebounded from their winless first week with a strong 5-1 performance to gain first place; however, their lead is tenuous with 4 teams tied for second place and only 1 game back of the Locos. 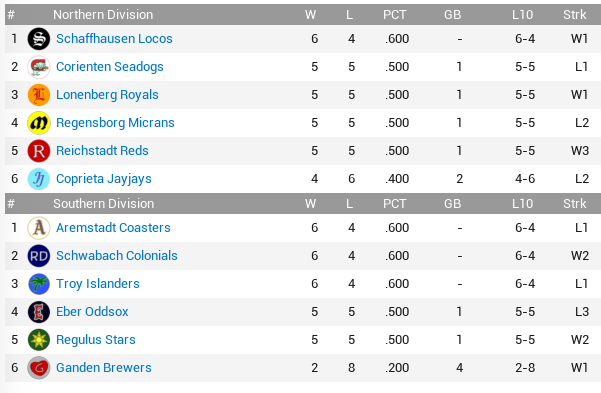 The 2017 All-Star Game was played on August 8 at the Drumlinstaid in Eber, Kendal. The dominant Southern Division performed to expectations, beating their Northern Division rivals 4-1 and securing home team advantage in the Kilder Cup.

Left Fielder Andrew Lopez of the Ganden Brewers, earned the coveted Most Valuable Player (MVP) Award for the All-Star Game, having hit 2-for-2 with a double and scoring 2 of the Southern Division's 4 runs. Lopez's performance was welcomed good news for the Brewers, who endured an otherwise disappointing regular season heading into the All-Star Break.

An abbreviated week of play due to the All-Star Break finished with each team playing a further 4 games. The break impacted some teams positively, while others were worse off due to the pause in momentum. The Colonials' downfall from their dominant pre-season and healthy start to the regular season continued, with the team losing all 4 of their latest games, and sliding from being tied for first place to second-last in the Southern Division. The Reds, entering into the All-Star Break with a 3-game win streak and tied for second place in the Northern Division dropped their last 2 games, finding themselves now tied for last place. The Coprieta Jayjays meanwhile won 3-of-4 to move out of the basement of the Northern Division into a tie for third place, while a similar performance by the Troy Islanders have given them sole possession of first place in the Southern Division.

With each team having 8 games remaining and the standings still very close in both divisions, it is anyone's guess who will take playoff spots; however, baring a miracle for the Brewers, who are 5 games back of the Islanders, it appears their season will come to a disappointing close. 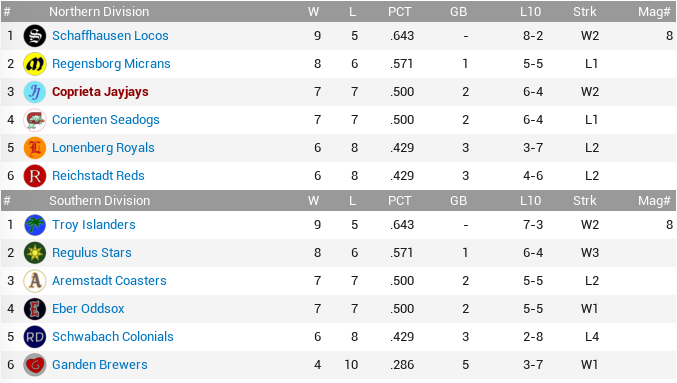