The 2013 Provinces' Cup was the first ever tournament of the Gerenian Provinces' Cup, and was held in Maremedres between 22 September and 4 October 2013. All the eight Provinces of Gerenia took part in the competition, with the Ramez team obtaining the title.

Maremedres province was chosen as hosts of the tournament in a special meeting of the Gerenian FA. 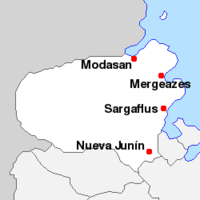