Between the first and second rounds, EWP candidate Isa Kaliandaron Qor suffered a cardiac arrest and died. Despite coming third in the first round, Deirdre Valour (of the Ecological Movement, Goldshire) subsequently advanced to the second round. In the end, incumbent prince Frederik Haabye Truls was re-elected with approximately 80% of the vote against Valour's 20%. 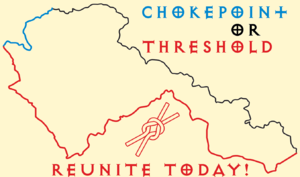 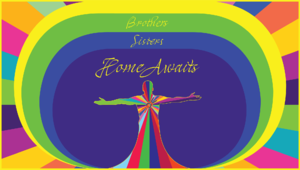 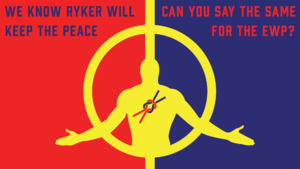 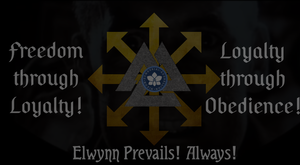 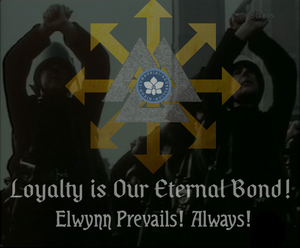 Following Ryker003's acquisition of Elwynnese citizenship, the Party for Reunification received the full backing of the OS and its resources. This led to a massive media appeal to the Party's target base through radio advertisements and the erection of billboards throughout Asantelian and Eastern Wintergleam (officially the congressional county of Wintergleam and the bailiwick of Maskerer). The campaign, unofficially dubbed "P.R.P.R.", also mailed to each address in the party's mailing list a small crate of PR flags and silver plated pins shaped as a square knot to be worn and distributed throughout the community in solidarity.

Post-SCAR's accession, PRPR was deemed a total and resounding success and moved onto a platform of reunification of all remaining historical Lands of Wintergleam with the Sovereign Confederation.

Meanwhile the EWP campaign focused on the unholy N&H–DEM–PR alliance as threatening to the very fabric of the Elwynnese nationhood - that if Truls won a re-election, given the PR's support of him, that Elwynn would cede the counties of Asantelian and Wintergleam to the Sovereign Confederation. Further, EWP campaigns focused on the N&H as the warmonger, highlighting that under N&H rule, Elwynn has been involved in wars in Northern Tellia, RIB, Floria, and is likely to be involved against the Guttuli Protectorate as well. With Qor as Princess of the ELwynnese Republic, the government would seek out peace and stability, within the Raspur Pact defensive alliance, and bring an end to wars. Further, the EWP would be the guarantor for social equality, and the strength of the Republic – the Elwynnese peoples united as one nation, undivided.

The EWP responded to the N&H accusations by stating that the EWP would always support the Raspur Pact and aid to the defence of Raspur Pact states, but that we can avoid future wars by adopting a different behaviour where we respect other states, and try solve differences diplomatically.

As for the Asantelian/Wintergleam question which has infected the debate, the EWP considers it unfavourable to Elwynnese nationhood that the N&H and Truls have not ruled out any retrocession to the Sovereign Confederation. The Elwynnese Republic is built on the fine balance between its autonomous republics, and any change to that balance requires careful consideration. The EWP is however open to discuss new or other forms of federalization with the view to give both federal and local governments more democratic legitimacy.

The N&H policy on the Asantelian question is that plebiscites will be held in the Bailiwicks concerned, so as to determine their ultimate sovereign allegiance. The outcome of these plebiscites, to be held one year after the election, will only concern the status of the bailiwicks of Tephal, Asantelian and Orenthaven. Eastern Wintergleam is and remains historically Elwynnese and will only host referenda if a similarly free and fair vote is held in Western Wintergleam. Pro-N&H publications such as the longstanding Daily Mail & Telegraph of Eliria heaped scorn upon the EWP position viz the Raspur Pact, noting that the wars so vociferously condemned in the EWP campaign were the very same defensive wars, undertaken for the protection of allied powers that the Pact was intended to wage. In the words of one editorial: "Either the EWP is being wilfully disingenuous about its adherence to the Pact or else its leadership has demonstrated a fundamental ignorance of the basic details of our country's foreign policy and grand strategy which ought to terrify all right thinking Elw."

The N&H campaign, focusing on loyalty and solidarity in the face of those who sought to diminish Elwdom, also ran very heavily with an angle of celebrating the 30th anniversary of the Auspicious Occasion - the expulsion of the Vanic monarchy and the Froyalaner settler population. Propaganda materials released by the N&H described the expulsion of the Froyalaners, and their subsequent fate at the hand of Imperial authorities, as a "vindication of Elwdom" and the "true commencement of the second independence era".

The N&H pledged to continue its campaign against the culture of corruption and accommodation that had been fostered in the Congressional Counties during the weak succession of AIP governments. The Censor in the former Northern Commonwealth would be joined by a Public Accountability Tribunal especially dedicated to holding former AIP regime officials to account for their compromises and connivance with the twin evils of Vanic Revanchism and Verionism.

Amongst the social and economic policies announced by the N&H was included a proposal for land reforms obliging municipal corporations to release a third of the lands under their direct ownership and charge for the purpose of resettling veterans and the dispossessed, the use of public funds for road building and construction projects, a tapering off of historic fuel subsidies for cities in unsustainable locations within the circle of the Boreal latitudes, and the redevelopment of Vijayanagara as a free port so as to encourage inward investment into Agnesia in the wake of the Verionist Vespers and the expulsion of the Iron Company.

Once the accession of SCAR had resolved the differences between the candidates with regard to the Wintergleam question, the campaignb quickly quietened down. During this time, two new candidates were registered by the Electoral Committee. Their curious eccenticism made them prime candidates for the media, given much speech and advertisement time.

The EWP tried to engage with them on their merits. Qor met Beebullahabadi and Valour at a debate in Elijah's Rest, and found an unlikely ally in Valour when Beebullahabadi refused to shake the women's hands, and the two women made a deal out of this. However, as the debate progressed, many viewers found Qor's debating style to be boring and pretentious, while Valour and Beebullahabadi clashing was classed as entertaining and informative.

Out of all votes cast across the Republic, 42.70% were in favour of Frederik Haabye Truls, the incumbent, 36.52% in favour of Isa Kalianderion Qor, 14.09% in favour of Valour, and 6.32% for Amin Salman al-Beebullahabadi.

With no candidate receiving a majority of votes, a second round was planned.

Exit polls around the Republic suggested that the voting share for each candidate per linguistic group was as follows:

Political scientists called the inability of the incumbent prince to secure a majority of votes in the first round an "upset", and called upon the N&H to rethink their strategy. Some political scientists attributed the low support of Babkhis for Truls (only 53%), traditionally core N&H voters, to the presumtion that the N&H have "turned Nordic" and "no longer are a voice for Babkhi concerns". Al-Beebullahabadi played especially on these concerns, who secured many votes outside the core Umraist fellowship in Elwynn. Among Agnesians, Beebullahabadi secured a majority, with many Agnesians feeling that they have been abandoned by the N&H into a liberal northern heartland, despite the Prince's attempt to bring down Ayreonism.

In Amokolia, most voters voted for Qor. There appears to be a distrust in the Prince's handling of the Amokolian Question, a lack of initiative on Amokolian reunification and concern with the so-called Anti-Vanic Containment Wall.

In Elwynn's newest territories, a lot of support was given to Valour, the only SCAR native participating in the election. It is believed this is generally due to ethnic loyalty than affiliation. The SCAR accession to Elwynn surprised many people in SCAR, and this has been reflected in the voter behaviour.

Positively for Truls, the Norse came out in large numbers for him. This is generally attributed to his closeness to Einhornism and his own Norse ethnicity, especially in Normark, where he scored very very high numbers. Norsemen in continental Elwynn, however, appear more closely aligned with the Workers' Party, the traditional party for Norsemen in Elwynn.

Many voters who were interviewed in the exit polls were disappointed that the Democrats, despite having a hugely popular leader and congressional leader in Helena Strand, did not field any candidate of their own. Many voters who voted for a non-Truls candidate, who nonetheless saw themselves as Democrats, said they would have voted for her if she had been a candidate. Strand is hugely popular across all ethnic groups, except in SCAR where she is largely unknown.

In the second round, only the two contenders who have the highest and second-highest number of votes in the first round normally compete for the voters' favour. As such, after the conclusion of the first round, the electoral commission announced that the incumbent Frederik Haabye Truls (N&H) and the contender Isa Kaliandaron Qor (EWP) would face each other at the second round on 8.IV.1682. However, on 5.IV.1682, on the campaign trail in Ardashirshahr, Qor suffered a cardiac arrest and died.

The Court of the Prince announced a period of mourning, and attended vigils for the fallen Qor. Prince Truls suspended his campaign and held instead a live-transmitted eulogy where he praised Qor's devotion to the cause of Elwdom, her selfless service for the Elwynnese nation, independence and republic. Truls's speeches in favour of Qor's happy memory, where he referenced her long history of patriotism and service, led, according to many analysts, to a ruse of Elwynnese nationalism across the Elwynnese Republic. Truls also abdicated any decision on how the elections ought to be conducted, although many in the N&H thought the answer was that "clearly" Truls had won the election with no second round necessary.

The Electoral Commission announced later that the two candidates in the second round would be the incumbent prince, who had secured a plurality of votes in the first round, and the third-placing human ecologist, Deirdre Valour. The Commission also delayed the second round of the election by a month to 8.V.1682. In the campaign period, only Valour officially campaigned, while N&H supporters were instructed to wear clothes of grieving and act calmly and dignified. Truls ordered a state funeral for Qor, attended it and held yet another eulogy for her amid the red banners around her coffin. He did not, however, attend the procession leading from the Palace of the Workers in Eliria (the EWP party headquarters were the funeral service was held) along the Avenue of the Workers' Revolution (a thoroughfare in Eliria) to the crematorium where Qor's remains were incinerated. Valour attended both, however, though discretely.

On 9.IV.1682, the results from the voting in the second round was announced: Incumbent prince Frederik Haabye Truls was re-elected with approximately 80% of the vote against Valour's 20%.