The 1670 Liga de Hierro is the first season of the Liga de Hierro, the top professional league for association football clubs in Los Liberados. The season started in Mediomes 1670 AN.

There were eight teams participating in this season. Since it was the first time that the Liga de Hierro was played, none of the teams had participated before.

The 1670 Liga de Hierro was won by Atlético Nacional, who snatched the title in their last game. Bátavos F.C. ended last in the competition, but won its two play-off matches against Tigres F.C. to ensure a place in the Liga de Hierro in the 1676 season. 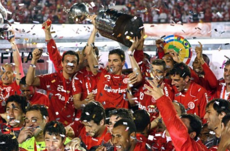 Atlético Nacional, winners of the 1670 season, holding the cup.
Retrieved from "https://micras.org/wiki/index.php?title=1670_Liga_de_Hierro&oldid=123584"
Categories: