The 1634 Assembly Elections (March 2016 Assembly Elections) were the second democratic elections held in the Jingdaoese Empire since its establishment. They found place on 24.09.1634 AN. Two major parties ran for office: the National-Centrist Party of the Rising Sun (Jingdaoese nationalists) and the United Jingdaoese Populist Party (populists / regionalists). The National Republican Party of Norfolk, Liberal Trade Alliance and Partito Populare di Tyrenia participated as well, but in coalition with the major parties and stayed local. 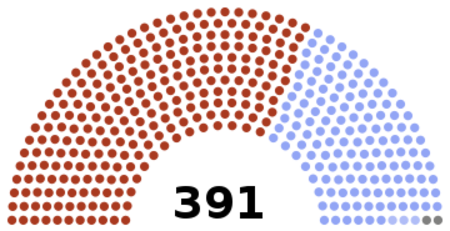 Each State is worth a certain amount of seats. This explains why the % of received votes does not necessarily result in the same % of seats.