The Craitland general election, 2020 was the fifteenth general election to be held in Craitland, and was held in September 2020 (the year 71 AC, by Craitish dating). The election was held using mixed-member proportional representation voting and was won by a United Conservatives majority government led by Prime Minister Ribe Särensen. 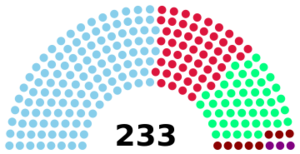