The Craitland general election, 2006 was the first general election to be held in Craitland, following the nation's successful claim on Micras, and was held in September 2006 (the year 15 AC, by Craitish dating). The election was held using party-list proportional representation voting and was won by a United Conservatives majority government led by Prime Minister Lydveldt-Jon Cólsen. 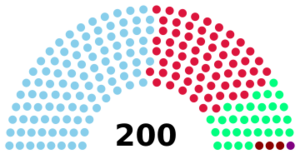